The capital city of the Scandinavian country of Norway, Oslo has a certain charm of its own. It covers an area of 453 sq kilometers and is situated at the end of a 110 kilometer long fjord called Oslo Fjord. Forests and fjords dominate the landscape of Oslo. In fact every year in the month of June a music festival called the ‘Norwegian wood festival’ is held in Oslo, at which top bands from all over the world participate.

History
Oslo is a city whose history can be traced back over centuries. Snorre Sturlason the historian has chronicled that Oslo was founded by King Harald Hardâde in 1048. Oslo was dethroned from it’s status as capital of Norway when Norway became a part of the Danish-Norwegian union from 1348-1814. Norway achieved independence from the Danes on the 17th of May in 1814. This day is celebrated with much pomp and glory all over the country now. Independence Day is a big celebration for the people of Oslo as well. This vibrant and cosmopolitan city is also the locale for the awarding of the Nobel Peace Prize every year.

Weather
The best time to visit Oslo is from May to September, the day mean temperatures at this time are pleasant and are generally are around 20C(69F) while in Oslo winters the days are short as mean day temperatures dip below 0C(20F) and there is considerable snowfall. All this makes Oslo an attractive winter sports destination. The spectacular Northern Lights (Aurora Borealis), the fire works of the sky are visible during the Oslo winters. Oslo is a popular ski destination during the winter.

By Air
The Oslo Airport is situated 45 kilometers away from the city center. Several European as well as other international airlines and domestic carriers such as SAS Braathens call on Oslo’s airport which is situated at Gardermoen. The Airport has modern amenities such as cafes, bars, duty free shops and also a Global Refund desk. In Norway VAT is included in the sale price of an item and a foreigner is entitled to a refund of this VAT if the foreigner has spent a total of 315 kroner ( the Norwegian currency) in a single store and has obtained a Tax refund receipt. Another Airport called Torp airport is located near Sandefjord 115 kilometers from Oslo. Low cost airlines like Ryan Air, Wiz air call at Torp airport. 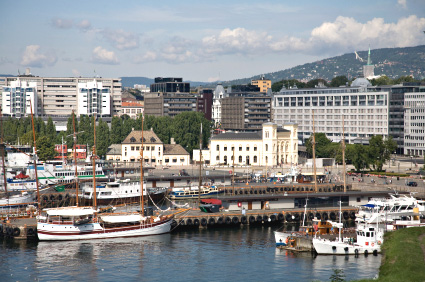 Transport from the Airport
A high speed train called Flytoget plies between Oslo’s central station and the Gardermoen airport. The train ride costs 160 Kr and the journey time is 19-20 minutes. This train is the most convenient way for a tourist to get to the heart of the city speedily. There are slower trains which cost 82 Kr which also provide connections to the airport. Flybussen is the name of the bus service to the city center from the airport these travel at a slower rate and take 45 minutes to get to the city from the airport. The Taxi service which is booked from within the airport is astronomically expensive costing from 395 Kr upwards for a journey to downtown Oslo. The Torp airport is connected to Oslo by a bus service called Torpekspressen.

By Train
Daily international train services operate from the Oslo Central Station located in the eastern part of the city. The international services operate to cities in Sweden namely Gothenburg and Stockholm. To get to Copenhagen in Denmark from Oslo one has to change trains in Gothenburg. The trains are operated by the state run NSB train company which also operates on domestic routes to neighboring cities such as Bergen and Trondheim.

By Road
The City of Oslo is served by a network of Highways. The Highway E6 is an international highway from Malmö and Gothenberg in Sweden which runs north south through Norway connecting cities. Another International Highway serving the city is E18 it links Oslo with St Petersburg, Helsinki and Stockholm. The use of these highways invites a toll of 20 kr which is used for the upkeep of the roads and highways.

Several European bus services traverse these highways to link Oslo to neighboring cities in Sweden and Denmark. Swedish companies such as Safflebussen, Lavprisekexpresen and Swebus provide inexpensive and efficient bus service to other Scandinavian cities. Euroline is another international bus service connecting Oslo to other cities in Southern Europe while Moravia Express links Oslo to cities such as Prague.

By Ferry
One can access Oslo by car ferry as well. The car ferry services are operated by various companies such as Color line, DFDS and Stena Line. Oslo is connected by car ferry to cities in Denmark, Sweden and Germany.

Getting around the city
Several car rental companies such as Avis, Hertz, Europcar are available at the Oslo airport but since Oslo is a small city finding parking can be a nightmare. Parking is expensive as well.

Oslo has an extremely efficient public transport system and information about the various modes of transport available to a tourist can be had from the Trafikanten which is located outside the Oslo central station. The Trafikanten makes available information, free maps as well as tickets for travel for the tourist. Public transport runs from the early morning hours to midnight. A variety of passes such as the Tourist Ticket valid for unlimited use on any mode of transport for a single day and the 24 hr, 48hr, and 72hr Oslo card make the use of the excellent public transportation system very convenient for a tourist. The Oslo card also enables the tourist to get free admission to museums and other discounts.

By Metro
The subway or metro of Oslo is called Tunnelbane or T-bane. It is composed of six lines and serves the city center as well as the suburbs.

By Buses and Trams
Buses and Trams supplement the subway network and serve areas not yet connected by the T-bane. Jerbanetorget is an important transport hub for the tram and bus network. Buses such as Bus 31, 34, 37 and 54 are useful buses for tourists as they cover areas of the city not covered by the T-bane.

By Ferry
The ferry service is seasonal and runs in the summer months of April to September. The Ferry links the City Hall to the museums on the island of Bygdøy.

By Taxi
Cabs in Oslo are metered and expensive. Short distances can cost upwards of 100kr. There are various cab companies operating in Oslo and they have a complicated system of surcharges for various services. Cabs can also be called but this service as in other cities of the world attracts a surcharge too.

By Bike
Oslo can be explored by a tourist by availing of the public bike service which exists in the city. It is complimentary and one can on verification of one’s hotel key at the tourist office pick up a bike for a maximum three hours at various locations in the city.