The Seoul of South Korea

The heart and soul of South Korea, Seoul is a Korean term literally meaning capital city. It was originally known as Hansong, it got its present name in 1945, when Korea, then a single country, was liberated from 35 years of Japanese rule.

The capital of the Republic of Korea, Seoul is divided by the Han River, which flows from east to west toward the Yellow Sea port city of Incheon, and about 40 km from the North Korean border, also known as the demilitarized zone.

Seoul has transformed itself many times, from a booming capital, to a ravaged city, a Hermit Kingdom and then a major player on the international scene. Seoul covers an area of 605 sq km and is surrounded by mountains, the highest of which is Bukhansan Mountain, 836 m above sea level. The city consists administratively of 22 gu (wards), which are subdivided into 526 dong (precincts).

It has been given the status of a Special City, and is administered directly by the national government. Seoul is also one of the world’s most digitally-connected cities. The city has played a prominent role in South Korea’s economic development and therefore is often referred to as the ‘Miracle on the Han River’.

History:
The earliest known human settlement in the region began in the Han River basin as long ago as 4000 BC. The first official records relating to Korea are in Chinese dating from the 1st century BC. Around this time, a general fled from China and set up a kingdom called Goguryeo (Morning Freshness) near Pyongyang (North Korea’s capital) which allowed Chinese influence to spread through the rest of the peninsula. Until 668 AD, the Three Kingdoms Period, the peninsula was ruled from three centers and the region of modern Seoul began to establish itself.

The city was known as Hanyang at the beginning of the Choson (Joseon) dynasty around 1392. In 1394 King Taejo had renamed it Hansong but nevertheless, it remained the capital of the kingdom. 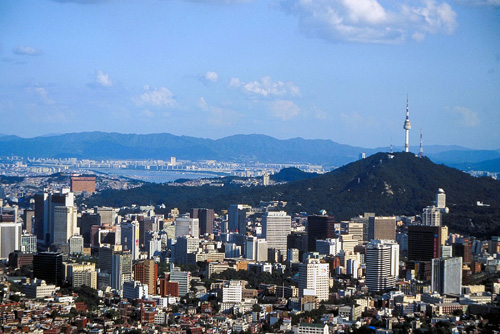 View of Seoul from Ansan

When the Japanese invaded the kingdom in1592, Seoul was partially destroyed. However, a Korean-Chinese force defeated the Japanese but while retreating, the Japanese took with them many of Korea’s top artisans, and most temples and palaces were burnt to the ground. Seoul was again ravaged in 1636 by the Manchus.

Witnessing so much violent turbulence, Korea withdrew into a shell in the mid-17th century, and was known as the Hermit kingdom. But peace remained only for a few generations. In 1910 Japan annexed Korea and renamed it Kyongsong. Extensive railway networks were built in Korea during this period with the main railroad station in Seoul. The city was also developed for commerce, trade, and military activity.

Just before the end of World War II, the United States and the Union of Soviet Socialist Republics (USSR) agreed to divide Korea at the 38th parallel, into North and South Korea. The city was renamed Seoul in 1945 and made capital of South Korea in 1948.

Seoul was again in the midst of violence during the Korean War (1950-1953) between North Korea and South Korea. The city was captured and retaken four times, and most of the city was brought to the ground by the end of it. However, after the war the city was rapidly rebuilt and it continues to prosper rising from its ashes.

What to see & do:
One of the most prominent features of Seoul is the 497 km-long Hangang River. The total length of its tributaries reaches an impressive 7,430 km. These days, the Hangang Park has become a scenic space where people can stroll, lounge around and commune with nature. Specifically, there are eight scenic spots of the Hangang some of which are the Hangang Park along the waterside; the Nature Study Park with its diverse flora that includes over 158 classes of trees and 202 species of flowering plants; Bamseom which consists of two islets where you could spot over 25 species of migrant birds including mallard ducks, mandarin ducks, kestrels, and spot-billed ducks, which flock here every winter; the Yeouido Saetgang Ecological Park that is home to many plants and animalsand also serves as an outdoor classroom for observing and studying living beings; the Turtle Ship Dock which is a life-size replica of the ship that was destroyed during the Japanese Invasion of Korea in 1592,where you can try traditional folk games including archery, stick-throwing, kite-flying, and Korean wrestling; and the magnificent Uri Flower Garden.

Seoul was the ancient seat of Korea’s royalty, and subsequently, there are some magnificent palaces in the city that still remain standing after centuries.

Gyeongbok-gung or the Royal Palace is from the time of the Choson Dynasty, and is Seoul’s grandest palace. Once you step in, you feel you have stepped back in the time when the place was at its grandest and the modern Seoul disappears from your mind. The initial construction of the palace began in 1395 and has since then been destroyed by two Japanese invasions. However, sincere and extensive restoration works following the Korean War have brought back most of the old grandeur. The palace has exquisite art and architecture and the spacious grounds ensure that even when it is crowded, the palace will offer you a quiet corner to reflect in and admire its wonderful craftsmanship. Don’t miss the Kunjongjon Hall, the Kyonghoeru pavilion built over a man-made lake, and the ten-story marble pagoda. The vast grounds also house the Joseon Palace Museum and the Korean Folk Museum. 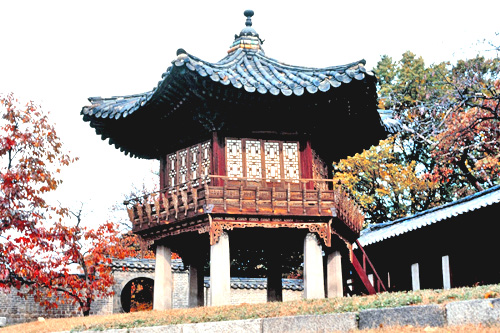 Changdeok-gung, Yulgukno, built in 1405, was the seat of power between 1618 and 1896. The structures have all been restored and have been designated as Seoul’s only UNESCO World Heritage Site. The main attractions here are the blue-roofed king’s office, Seonjeongjeon, and his bedchamber, the Daejojeon (great making hall). However, the most prominent feature here is the Biwon (Secret Garden) in the backyard. Previously a retreat for the Yi rulers of the Choson Dynasty, is now a 32 ha public park.

Deoksu-gung, is located in downtown Seoul just across the street from City Hall, Deoksu and is in vivid contrast to other palaces.
Built during the mid-15th century, the architecture of the buildings and as well as its interiors are heavily influenced by western designs combined with Korean styling.

Chang Gyeong-gung was built in 1104 as a summer palace for the kings of the Koryo Dynasty, and it ended up becoming one of the main palaces of the Joseon Dynasty. The palace was used as a temporary home for the king while the Gyeongbuk Palace was being built, and unlike other palaces that have a North-South orientation, ChangGyeong Palace faces East-West. Also, this palace connects to Jongmyo Shrine – where during the Joseon Dynasty sacrificial rites were held for the royalty.

In the oriental tradition of meditation, peace and tranquility, being around nature is an important part of life and even in the heart of the city, you will find many parks where you can relax and forget the hustle and bustle of daily life. One such park is the Sajik Park, which serves as a shrine to Tangun, the legendary ancestor of the Korean people.

The Boramae Park, used to be the site of the Korean Air Force Academy, and in 1986 it was turned into a park for the public. Boramae, or hawk in English, symbolizes the Air Force. The 360,000 sq m area houses sports facilities, a small zoo, a pond, and walking trails. A 9,000 sq m pond, surrounded by willow trees is a great place to just sit on one of the benches and commune with the natural surroundings. The pond is especially spectacular when it is covered with snow in the winter. 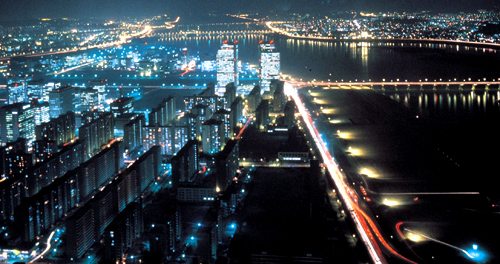 Mt. Namsan Park is located right in the heart of Seoul and is an ecology-island surrounded by urban districts. Wild animals roam here, which is quite surprising to find in the midst of a crowded city. The pine trees on the surrounding hills and the fresh mountain air draws many to its environs.

The Olympic Park was built for the 1986 Asian Games and was also used for the 1988 Seoul Olympics. The lake, the large luxurious sport field, and a square with sculptures are among the popular attractions among visitors. The trails are ideal for jogging or walking.

The Tapgol (Pagoda) Park is a relatively small park frequented mostly by the elderly. Within it are a pagoda and a comfortable gazebo to laze around in the shade. The park was the gathering place for the reading of the Korean Declaration of Independence on March 1, 1919, which sparked nationwide protests against Japanese colonial rule.

The Yeouido Park is spread over 230,000 sq m and attracts over 30,000 visitors just on weekdays and over 60,000 on weekends. The traditional Korean forest, ponds, walking trails, the shade of numerous trees and the colorful flowers, all invite you to make a trip here.

Mount Inwang is a 336-m hill on which stands the Inwang Temple and Seoul’s most famous shamanist shrine, Guksadang. Behind it are several creeks where you will also find many shamanist offerings and some unusual rock formations called Zen Rocks. There are also plenty of walking trails and you could also see the Seoul fortress running near the top of the hill. However, do not take any photographs or disturb any rituals being performed.

Namdaemun is the Great South Gate and has been designated as a National Treasure and is particularly spectacular when it is lit up at night. The adjacent Namdaemun Market is the largest traditional street market in Korea.

Dongdaemun is the old eastern gate of the city and the Dongdaemun market is known to be more interesting than the its counterpart. The Dongdaemun market is more modern and has large stores that group similar shops. Here you can shop for the Chimachogori, the Korean traditional dress, or bedclothes. A few of the shops are open all night in case you want to do some last minute shopping.

The Seodaemun Prison was built in 1908 and during the Japanese occupation it was used to house and execute Korean political prisoners. Actual prison cells, wax figures and videos are used to demonstrate the shocking brutality that took place within these walls.

The Seoul or Namsan Tower was once the tallest tower in Asia and it offers a splendid view of the city.

For the children, there are many entertainment options to choose from, one of them being Everland, the Korean version of Disneyland. Another is Seoulland, Lotte World, and the Children’s Grand Park.