The Grand Duchy of Luxembourg

Luxembourg is the 6th smallest country and the only Grand Duchy in the world. With an area of just about 2,586 sq km, it borders France, Germany, and Belgium. It is one of Europe’s oldest independent states. The nation’s capital and largest city is called Luxembourg City (Luxembourg-Ville).

Belgium and the Netherlands, Luxembourg form the Low, or Benelux, Countries. This geological region features the Lorraine plateau of northern France that meets the hills of southwest Belgium and the Moselle Valley and Rhineland of Germany. In the north there are the rugged uplands of the Ardennes plateau; and the Bon Pays (Good Land) in the south, which is a fertile area of low, gently rolling, hills. Much of Luxembourg has broad, deep valleys of swift streams and rivers running through it. The principal river here is the Sauer (Sure), a tributary of the Mosel.

Luxembourg is famous for its picturesque villages, medieval castles, and natural beauty. Rich deposits of iron ore were once heavily mined in the southwest, although most of these have now been completely used up. 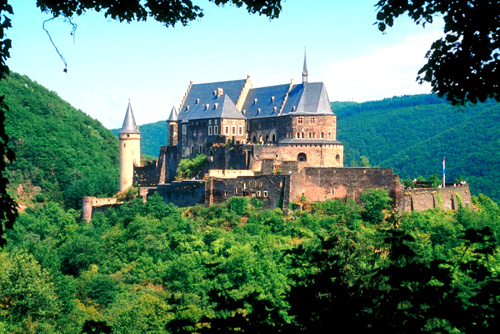 Vianden Castle is located in Northeastern Luxembourg, in an area known as the Ardennes

Luxembourg was a founding member of the North Atlantic Treaty Organization (NATO) and of the European Economic Community (EEC), and was also a forerunner of the European Union (EU). Its citizens have a strong sense of national identity, which is reflected in their national motto, ‘We want to remain what we are’.

Luxembourg has a moderate climate similar to the other Low Countries, with mild summers and cool winters. Springtime is a great time to be amongst the riot of wildflowers, celebrations and folk festivals nationwide. The weather from late-spring to early-autumn is also usually good for outdoors with a few showers here and there.

Historical Overview:
Present-day Luxembourg is believed to be founded by Count Siegfried of Ardennes, who raised a castle here in 963 AD and sowed the seeds of a dynasty that’s spawned rulers throughout Europe. By the end of the Middle Ages, Spanish, French, Austrians and Prussians were all waging war to conquer and secure this town. Besieged, destroyed and rebuilt more than 20 times in the last 400 years, it became one of the strongest fortresses in Europe.

The area of Luxembourg was once inhabited by the Treveri, one of the tribes of Gaul. Later, it came under Roman rule and was included in the province of Belgica Prima.

In the 10th century, Siegfried’s fortress became the center of a small town that grew around the stronghold. For the next four centuries, Spain and Austria alternately dominated Luxembourg. By the end of the Napoleonic Wars in 1815, Luxembourg was established as a grand duchy by the Congress of Vienna. However, it was also simultaneously placed within the German Confederation, and Prussia was permitted to garrison troops in Luxembourg City. In 1830 the Belgian provinces of the Netherlands revolted and the grand duchy joined them. Belgium became an autonomous kingdom by the year end.

In 1912 the Frankish Salic law, which barred female succession to the throne, was repealed and Marie Adelaide became Luxembourg’s first grand duchess. With the coming of the First World War, in August 1914 German military forces violated Luxembourg’s neutrality and occupied and retained control of Luxembourg for the duration of the war.

Once independence was restored after the war in 1918, Marie Adelaide abdicated in favor of her sister, largely because of Marie’s close association with Germany during the occupation. Constitutional reforms were initiated giving the duchy a more democratic government.

In the Second World War, Luxembourg was again seized by Germany. The reigning grand duchess, Charlotte, and members of the cabinet fled to France. In 1942 the Germans proclaimed the grand duchy a part of the Third Reich. The northern regions of Luxembourg were surrounded by the Germans, but the duchy was liberated by January 1945. The same year, Luxembourg became a member of the United Nations. Later, Luxembourg abolished its neutral status and joined the North Atlantic Treaty Organization (NATO) in 1949.

Sights around the city:
Luxembourg is the only place in the world from where you can have breakfast in Germany, lunch in France, dinner in Belgium, and get back in time for a nightcap! The main attractions of this 1000-year-old fortress city can easily be seen by taking a relaxed stroll in the afternoon. You could start on the Corniche on top of the old ramparts, also known as ‘Europe’s most beautiful balcony’.

The city center measures a mere mile by a mile and a half, so there is not much scope to get lost here, nor will you waste much time asking for directions. And if you prefer taking ni the joys of natural surroundings, a mere five-minute train or bus ride out of town, you will find some of the world’s densest network of hiking paths that entice you to take a refreshing walk.

Luxembourg City is perched high atop a rocky outcrop, overlooking the Petrusse and Alzette rivers, and offers stunning views from the city’s old ramparts. Luxembourg City, during the Middle Ages, was a fortress at par with Gibraltar and was even called the ‘Gibraltar of the North’. Parts of the original walls and fortifications still remain. It has even been designated as a UNESCO world heritage site.

Luxembourg Fortress: The citadel within the now dismantled fortress dates back to 936, and is located on a rock called Bock. Today, the base of a stone tower and a belfry locally known as the ‘hollow tooth’, are all that remains from its glory days. A museum also was built on the site which takes visitors on a historical tour of the monument. The museum also serves as the entrance to the Casemates, part of a once 13-mile network of underground caverns, made by man, used to house men, horses and armor during sieges.

The Grand-Ducal Palace: The Palace was originally built for use as a Town Hall in the 16th century, but the Luxembourg royal family took it as their residence in the 19th century.
In the summers, there are guided tours available that take you inside the grand palace for you to admire the splendor of the rooms, the opulent tapestries, chandeliers, and wood paneling.

Notre-Dame Cathedral: The 17th century Cathedral, some 200 m from the Place d’Armes, overlooks the Petrusse Valley. The magnificent baroque gallery inside was carved in 1622 and is part of the Jesuit monks’ convent church. The building next to it was a Jesuit college in those times and is now being used as the National Library. The apse contains ‘The Comforter of the Afflicted’, which is a wooden statue of Madonna and Child, to whom the cathedral is devoted. Here you will also find the tomb of John the Blind who was one of Luxembourg’s medieval rulers.

Old Town: the perfect blend of cobbled streets, historical buildings and contemporary boutiques and outdoor cafes, gives the place a unique charm. The Old Town houses many of the city’s luxuriously green parks and gardens making this an ideal city to take a walking tour, especially considering the small size of the city. The stunning Petrusse Valley, some 200 ft below the main town, is a great place to unwind. Here you can relax in the midst of nature and leave all your worries behind.

Place d’Armes: this tree-lined square at the centre of Luxembourg’s old town is often referred to as the city’s ‘sitting room’ with its numerous outdoor cafes and a central bandstand, located in the pedestrian centre of town. Here you can relax and watch the world go by, while sipping coffee and munching on delicate, melt-in-the-mouth cakes and pastries. Or if you’d rather prefer something more concrete, you could try some of the excellent local beers and wines. All this while being serenaded by the frequent free concerts that take place here throughout the summer. 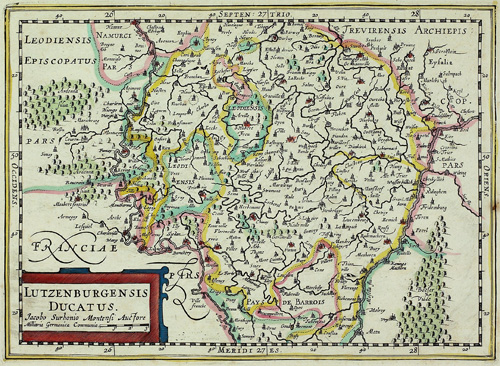 On the adjoining Place Guillaume, also known as Knuedler, a vegetable market is held every Wednesday and Saturday morning where you can get a taste of the local flavor and color.

Musee National d’Histoire et d’Art: The Museum (of art and history) is housed in a group of medieval houses that has over 120 rooms. The collection includes paintings, artifacts, and sculptures from the Stone Age to the present day. The Museum not only includes works by great artists such as Turner, Rubens, Rembrandt and Breughel, but also of lesser-known local artists. The bold exterior facade, added recently is in striking contrast to the patrician’s houses around the old square.

The Musee d’Histoire de la Ville de Luxembourg is nearby. Here you can retrace the evolution of the city through the ages. And while you are here, don’t miss the opportunity to visit MUDAM, the brand-new museum of modern art.