The Ancient City of Athens

The name of Athens is enough to conjure up images of gods and goddesses with perfectly chiseled bodies, temples, art, mountains and Greek food!

Often referred to as the cradle of western civilization and the birthplace of democracy, with a recorded history of over 3000 years, Athens is a sprawling city located on the Attica Basin of Greece. The city is half surrounded by scenic mountains like the peaks of Aegaleo, Parnitha, Penteli, and Hymettus – at least one of these peaks can be seen from nearly every street in Athens. The Kifisos and the Ilisos rivers flow through the city. Greece’s capital is named after the goddess Athena, the goddess of wisdom.

Since ancient times, Athens has given to the world momentous cultural achievements – classical architecture, monuments, and pieces of art. Much of Athens was rebuilt in the 19th century after Greece won its independence from the Ottoman Empire.

Athens is the centre of economic, financial, industrial, political and cultural life in Greece much like it was in the olden times – a center of the arts, learning and philosophy, home to Plato and Aristotle, Socrates, Pericles, and Sophocles.

The city still has remnants of its golden years evident through a number of ancient monuments and artworks, the most famous of all being the Parthenon on the Acropolis. Here you will also find many Roman, Byzantine and Ottoman monuments, that take you through the city’s history through the centuries.

Athens was the host city of the first modern-day Olympic Games in 1896. 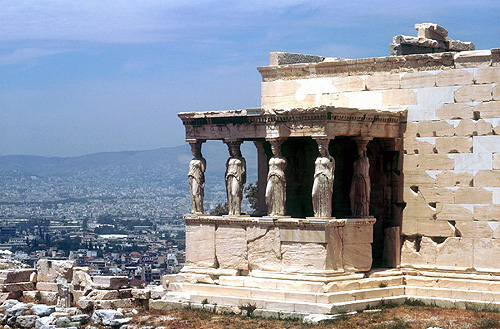 History:
Athens is named after the Greek goddess Athena, the goddess of Wisdom. According to Greek mythology, Zeus, the ruler of the gods, had a contest between Athena and Poseidon to choose a patron for the city, and the residents chose Athena’s gift of an olive tree rather than Poseidon’s gift of a freshwater spring, and they dedicated their city to her and she became the ancient city’s divine protector. The main temple to Athena on the Acropolis, the Parthenon, also served as the city’s treasury and has been around since Neolithic times.

As early as 1400 BC, the Acropolis was fortified which was helpful since there was constant fighting among the Mycenaean Greeks. In the 9th century BC, surrounding areas, including the seaport of Piraeus, was incorporated into the city-state.

The monarchy was replaced by an aristocracy of nobles and the city was controlled by the Areopagus (Council of Elders), who appointed magistrates, or archons, who decided on all matters of the state. However, there was widespread discontent among the people with this system which led to a short-lived dictatorship by Cylon in 632 BC.

Continued political instability led to the imposition of the Draconian Code, named after an Athenian lawgiver Draco. This was a harsh set of laws that eventually brought about the appointment of Solon as chief archon in 594 BC. Solon established a council, a popular assembly, and law courts, encouraged trade, reformed the coinage, and invited foreign business people to the city. Although these reforms were not totally successful, they are considered to be the foundations of democracy.

In 560 BC, Pisistratus gained control of Athens, and he built a new temple of Athena on the Acropolis. He also sponsored many other public events and was very popular with the people.

During the Persian Wars between 490 and 479 BC, the Persian Empire sacked and nearly destroyed Athens. However, their victory was short-lived as the Athenian leader Themistocles defeated the Persian invaders at the decisive naval Battle of Salamis and after the Battle of Plataea in 479 BC the Greeks got back their independence. Themistocles, during his lifetime, tried to restore the city and built circuit walls around Athens and Piraeus. He also began construction of the Long Walls connecting Athens with the port, which was continued by Pericles.

During the time that Pericles was in office, he made great strides in bettering the city and his term is often called the Golden Age of Athens or the Age of Pericles. The Parthenon, the temple of Nike, the Erechtheum, and other great monuments were built during this time. He also developed the agora, which began to display imported goods from around the known world. Cultural advances were also made in the fields of theatre with great tragedies and comedies being produced in the Theater of Dionysus, below the Acropolis. With its democratic constitution and brilliant culture, the city came to be known as the school of Hellas. 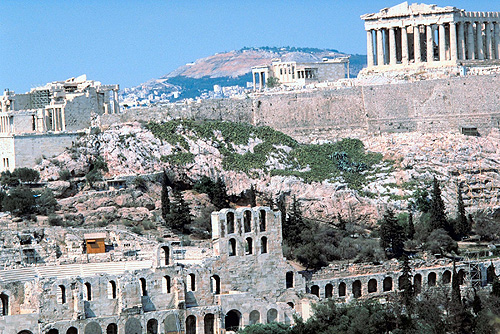 Theatre of Dionysus and the Parthenon

The imperial ambitions of Athens, however, brought about the Peloponnesian War in 431BC with Sparta. The Spartans pillaged the surrounding countryside while Athenians held out behind their city’s walls. Athens was defeated and the victors imposed their leadership, and removed most of the city’s fortifications, including the Long Walls. Athens survived the war but had lost its empire and its democracy, and was left weakened.

A democratic coup against the pro-Spartan Thirty Tyrants restored democracy in Athens in 403 BC. However, after the defeat, many citizens saw a need to strengthen moral values and even put the great Greek philosopher Socrates on trial where he was forced to take his own life as he had questioned traditional ideas.

The city still continued to progress and in the 4th century BC, influential schools were founded by the philosophers Plato and Aristotle.

Once again though, Athens came under foreign rule, this time under Philip II of Macedonia, father of Alexander the Great, who won the Battle of Chaeronea and became the master of Greece. Then around 146 BC, Athens fell to the Roman Empire.

After the fall of the Roman Empire in 476, Greece became part of the Byzantine Empire. The Christian Byzantine emperor Justinian I closed all pagan philosophical schools, thereby ending the city’s classical tradition. During this time, many of the city’s artworks were moved to Constantinople (present-day Istanbul), and the temples became Christian churches.

Next came the Ottomans who gained complete control of Athens in 1458.
The Parthenon was converted into a mosque and in 1687 it was severely damaged when a Venetian bombardment ignited gunpowder that had been stored inside the building. In 1687, Athens was besieged by the Venetians, and the temple of Athena Nike was dismantled by the Ottomans to fortify the Parthenon. The following year Turkish forces set fire to the city. Ancient monuments were destroyed to provide material for a new wall with which the Ottomans surrounded the city in 1778.

From being one of the wonders of the ancient civilizations, the birthplace of democracy and many philosophers, to being ravaged, captured, and then restored to some of its ancient glory, the city seems to have come a long way, but it has never left its history too far behind.