Taipei is the vibrant super busy capital of Taiwan. The vibe in Taiwan is frantic akin to the vibe experienced in New York or Hong Kong where everyone seems to be super busy all the time. Known largely as a powerhouse for the manufacture of electronics especially computer hardware Taiwan is all that and more. Situated in the valley of the Danshui River Taipei was once had an agrarian economy characterized by rice and vegetable farmers, today is a bustling vibrant city which continues to be diplomatically isolated but populated by people who are up to speed and connected with all that goes on in the world.

History
Prior to the twentieth century, Taiwan was largely an agrarian economy. The Japanese colonized Taiwan in 1895. They set up their administrative head quarters in Taipei and developed much of its infrastructure as well. The native Taiwanese were very unhappy under the Japanese.

The Second World War saw the city annihilated by the bombing of the Allies. The Yalta Agreement signed at the end of the war ensured that the control of Taiwan would be handed over to China. Taiwan was subsequently administered by a corrupt Chinese general Chen Yi who was appointed governor. The Taiwanese revolted against Chinese rule and in 1947 there were anti-Chinese riots in which thousands of civilians lost their lives.

When the communists came to power in China in 1949, the Chinese ruler Chai-Kai Shek moved his government to Taiwan and the ‘Two China’ syndrome came into effect. As China got embattled in the Korea war of the 1950s the Mainland neglected its proposed invasion of Taiwan. The two China syndrome established the Mainland as the Peoples Republic of China (PRC) and Taiwan as the Republic of China (ROC). The ROC government rebuilt and vastly industrialized the country as a result of which Taiwan was one of the wealthiest Asian nations in the 1960s. 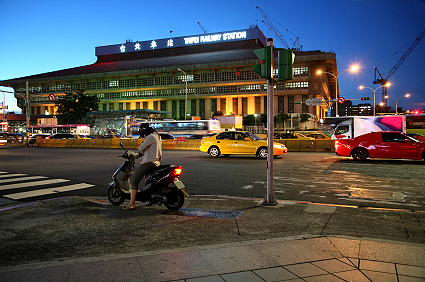 In 1971 Taiwan lost its UN representation to mainland China and the late 1970s saw Taiwan was being increasingly isolated. Unofficially though it does continue to be recognized by member states. Martial law was lifted in Taiwan in 1987 and since 1994 it has tried to get back its UN seat. This has been viewed unfavorably by the mainland which is keen to unite the two countries under their ‘One China’ policy. Recently in 2006 the Taiwanese got rid of their National Unification Council this has further displeased leadership in Beijing which views all these events as assertions of Taiwanese independence. The current political developments in Taiwan are being keenly observed by both China and the US and only time will tell what the future holds for this boisterous nation

Language
The official language of Taiwan is Mandarin Chinese. However other Chinese dialects are also spoken such as Hakka and Taiwanese.

Climate
Taipei is characterized by hot humid summers when the average daily temperatures are a high 29.4°C or 84.9° F. Taipei receives much rainfall in the summer months. The winters are generally drier with cooler temperatures which hover around 14.9°C or 58.8°F.

By Air
One can fly into Taipei’s Chai Kai Shek international airport located just outside the city on the north east side in Taoyuan County. Many Asian and other international carriers serve this airport. A peculiarity which must be mentioned is that most carriers change their names when flying into Taipei’s airport. British Airways for instance is renamed British Asia Airlines this is done with the view so as to not offend mainland China. Apart from international carriers the airport is served by Taiwan’s own Eva air lines. One can get to the city from the airport easily by cab but since most cab drivers don’t speak English it is wise to get the name of your destination written in Chinese to show the cab driver. There is another airport located in the heart of city called Songshan airport which is used mainly by domestic airlines.

By Bus
Taipei is served by an excellent regional bus service which operates out of four terminals located in the city. The government is trying to amalgamate all these four terminals into one central terminal to make it less confusing to navigate. Bus links exist to cities such as Taichung and overnight buses to Kenting or Taidong.

Getting around
Taipei is very easy to navigate as it is served by an excellent public transport system .The MRT or Mass Rapid Transport system was the first to be built in Taiwan and it runs from 6am until midnight. An all day pass for the MRT which also can be used on the bus service costs Taiwanese $150. The trains operate at a frequency of four to seven minutes.

The Bus network in Taipei is also well developed with buses connecting areas not served by the MRT and tickets are dependant on the length of ones journey. Some buses require tickets to be bought when one boards the bus and others require tickets to be bought at the exit. Another mode of transport used not only in Taipei but all over Taiwan is the motor scooter. This contraption can weave in and out of traffic easily and is not regulated by the laws that govern vehicular traffic.

The Taipei train station is the largest train station in Taiwan and it is a terminus for the MRT as well. Intercity train travel is much more expensive than bus travel, thus most people prefer to use the excellent bus service.

Taxis also form a convenient mode of transport and initial flag fall is usually Taiwanese $70. However as elsewhere there are other charges for luggage and night journeys etc.

Hotels
One of the most renowned hotels dating back to the times of Chai Kai Shek is the Grand Hotel. Once the epitome of luxury the hotel built in a traditional style has a somewhat dated feel to it. The Hotel can be accessed for rates and availability online at www.grand-hotel.org (886-2)2886-8888. In today’s scenario it is the Taipei Sheraton which is the hub of social activity. It was used as the locale for the wedding of the son of the President Chen Shui Bian. The Sheraton’s rates and availability can be accessed www.sheraton-taipei.com.
Taipei also has a few interesting and modern boutique hotels worth checking out; one of these is Ambience with its Phillipe Starcke accents and ultra modern accessories such as flat screen televisions. The Ambience can be accessed at www.ambiecehotel.com.tw. Mention also must be made that Taipei is increasingly a wired city with WIFI access being available at most spots. This access costs merely Taiwanese $100 a day.