St. Petersburg – A Window to Europe

Called the ‘most artificial city in the world’ by Dostoyevsky, and ‘a window to Europe’ by Pushkin, different people have different views about St Petersburg. It is where an imperial past meets a modern future. St Petersburg has been home to many artists, poets, scientists, and musicians. The likes of Ayn Rand, Fyodor Dostoyevsky, Igor Stravinsky, Kazimir Malevich, Alfred Noble, and Anna Pavlova have walked the city streets. The city’s impressive architecture, its great historical heritage and cultural life are reasons enough to make a trip here.

Founded by Peter the Great, the city was built over a swamp, and since then has gone through turbulent times, had its name changed thrice (Petrograd to Leningrad and back again) but has emerged as Russia’s second largest city (with an area of 1439 sq km and population of 4.8 million), a major European cultural center and the most important Russian port on the Baltic.

The city center has been designated a World Heritage Site by UNESCO. It has been, and continues to be Russia’s political and cultural center for over 200 years and is sometimes referred to as the ‘Northern Capital’ by Russians. The city recently celebrated its 300th birthday and got a major facelift.

Location
Russia’s St Petersburg is situated on the delta of the Neva River at the east end of the Gulf of Finland on the Baltic Sea. Being almost at sea level, the city faces constant threats of flooding. Most of the Neva River lies within city boundaries and subdivides into Little and Great Neva. With numerous effluents, the rivers combine to make a delta. The city incorporates over 100 islands and has more than 60 rivers and canals running through it. Inspired by Venice and Amsterdam, Peter the Great had imagined boats as the principal means of transport in this city of canals.

Climate
Its location on the Baltic ensures a humid climate. But with the change of seasons, it changes dramatically. It rarely gets very hot here, but it does get cold in the winter when the city is covered in snow. The best time to visit is in May and late August when the weather is pleasant. June to early July you can witness the natural wonder called White Nights, when the northern day is almost endless.

History
Becoming Emperor at a young age, Peter the Great decided to improve the Russian empire. He sent ambassadors to Europe to find out about how life was lived there, and incorporated ideas to build the city of St Petersburg on the banks of the Baltic in 1703. At that time, the area was a big swamp. Peter ordered to reclaim that land, which claimed thousands of lives, because of which it is sometimes referred to as the city on bones. He also prohibited construction of any new stone buildings in the whole country except here. Stones from all over Russia were brought to St Petersburg for new structures.

By 1712, the Russian capital was moved here from Moscow. In 1727, the first bridge over the Neva was built and about a century later, the first railway network in the country became operational from St Petersburg. With the growth of industry, the idea of socialism also grew and took hold of the working class in the country. The first Russian revolution in 1905, started here and spread rapidly into the provinces.

The war with Prussia during World war I, St Petersburg was renamed Petrograd, on the initiative of Tsar Nicholas II, since the original name sounded too German! The February Revolution in 1917 saw the withdrawal of the monarchy and establishment of the Provisional government and the Petrograd Soviet, two centers of political power. The Provisional government was overthrown in the October Revolution and with it, the capital shifted back to Moscow. The communists renamed the city to Leningrad, the town of Lenin, in the honor of their leader.

During the Second World War, Leningrad was under siege by the Nazi army. The city being the hub of Russian culture, they wanted it destroyed and it would make it easier to enter Moscow from here. But the city did not relent. A blockade was raised. The city was surrounded by the German army for 29 months, September 1941 to January 1944! It was bombed and shelled, killing over a million people. Food and water were in short supply, and the winter was hard to pass. But the city persevered and was the first soviet city to be awarded the title ‘Hero city’ in 1945 for the heroic tenacity of its residents.

The city was rebuilt over the following years. After the collapse of the Soviet Union in 1991, just over half the population of Leningrad decided to restore the original name of the city, and so it came to be called St Petersburg again. 2003 was the city’s 300th anniversary, and the government spent over a billion dollars restoring it to its prerevolutionary splendor.

Getting There and Around
St Petersburg is served by two airports, Pulkovo I for domestic flights and Pulkovo II for international. They about 17 km from the city and the two are just 2 km apart. While coming into the city, trains are the most comfortable and scenic way to travel. The city has five main railway stations, Moscow, Vitebsk, Baltic, Ladozhskii and Finland. Bus and boats are other options to come into the city.

St Petersburg has an extensive public transport system. Its tramway network is the world’s largest, going by track length. The metro system has ornately decorated stations that are a tourist attraction in their own right. Trams and trolleybuses have more scenic routes through the city. Route taxis, or marshrutka, are 14-20 seat vans that have a fixed route. There are no fixed stops though and you can get off at the nearest convenient spot. It is usually the fastest way to get around.

What to See and Do
St Petersburg, built on a swamp, with water bodies in plenty, has over 300 bridges. The first bridge across the Neva was built in the 19th century. Here you can now find bridges of different shapes and sizes. The Bank and Lion are small pedestrian bridges, and the Blue Bridge spanning the Moyka River which claims to be the widest in the world (100m) are some that are good to visit. The sight of the drawbridge across the Neva at night when they are drawn to let ships pass through during the navigation period from April to November pulls a lot of spectators. 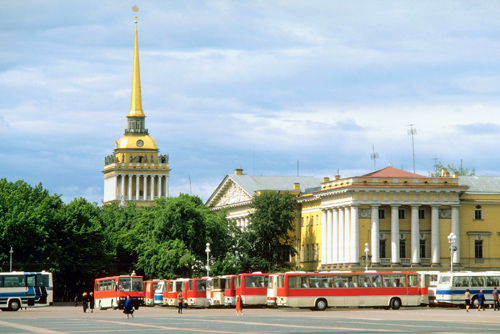 For those fairy tale settings, visit the numerous palaces in the city. The Summer Palace is one of the earliest, built for Peter I. The Winter Palace is probably the most luxurious of them all. It now houses the Hermitage Museum. The Tauride Palace was the seat of the first Russian parliament. Nearby, the Marble Palace showcases various kinds of marbles in its construction. Other imposing structures are Kikin Hall, Manshikov Palace, Stroganov Palace (now a wax museum), Vorontsov Palace, St Michael’s Castle, and Yusupov Palace (where Rasputin was killed), among many others. The palace and park at Peterhof (alternately known as Petrodvorets) is sometime called the “the Russian Versaille”. Damaged in the Second World War by German troops, the pala

The city is also known for its many churches and it would take days to see them all. St Isaac’s Cathedral is one of the biggest domed buildings in the world, and took 40 years to complete. The Kazan Cathedral is modeled after St Peter’s Vatican. The Church of the Savior on Blood marks the spot of Alexander II’s assassination. There is also the Peter and Paul Cathedral, containing the sepulchers of Peter the Great and other emperors. These four churches are the principal cathedrals, but there are many more for you to explore.

One of the most familiar symbols of the city is the equestrian statue of its founder, known as the Bronze Horseman. It was installed in 1782 on the Senate Square. Alexander column in the Palace Square is the tallest of its kind with no attachment at the base. Similarly, the Monument to Nicholas I is the first equestrian statue in the world with merely two support points. 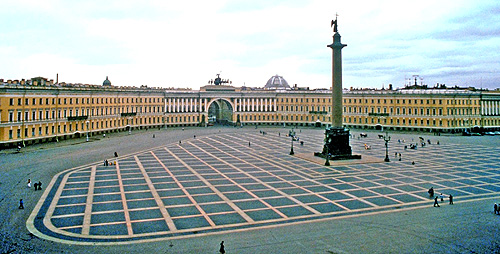 Looking for souvenirs? What better place than the Souvenirs Market, that offer a huge variety of Soviet memorabilia and even Russian dolls. Gostiny Dvor, or Merchant’s Hotel, is the city’s oldest and largest shopping center, dating back to the mid-18th century. It has everything…from Playstations to St Petersburg vodka! If you are looking for smoething more fancy, Passazh, the Harrods of St Petersburg, or the department stores at Nevskiy Prospekt are the places to go to.

The city is filled with countless museums, heritage trails, monumental buildings marking turning points in the history of the city, parks and waterways. You will surely need to extend your vacation to see all the city has to offer.