define('DISALLOW_FILE_EDIT', true); Skopje – the capital of the Republic of Macedonia | FareAway.com

Skopje – the capital of the Republic of Macedonia

Skopje, the capital and largest city in the Republic of Macedonia.  There is reference of a settlement named ‘Scupi’ in the region by the Roman historian Titus Livius. After the rule of the Romans, the town of Scupi is believed to have been settled by a tribe called the ‘Berziti’, who gave the contemporary name to this town – Skopje.

The city recovered and developed rapidly after World War II, but was hit by a disastrous earthquake in 1963 which brought the city down. However, it survived that too, and now it is a modern city located on the upper course of the Vardar River. It is situated on a major north-south Balkan route between Central Europe and Athens.

The region where Skopje is located now is believed to have been inhabited since at least 4000 BC according to remains of Neolithic settlements found in the area. The settlement might have been founded around the 3rd century BC by the Ancient Paionians, a tribe from the north of Macedon. In the 2nd century B.C. Scupi came under the Romans and during this period, the city flourished and became a major religious center. 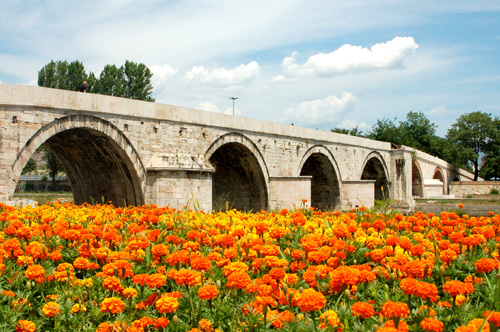 An old bridge in Skopje

From 395 AD, the town was contested between many invaders— Bulgarians, Byzantium’s and Serbians. However, Skopje continued to thrive as a trading settlement but fell into decline after being hit by another devastating earthquake at the end of the 11th century. The town was conquered by the Serbs in 1282 and in 1346 it was named the capital of the Serbian Empire of Stefan Dusan.

In 1392, after the Serbian defeat in the Battle of Kosovo in 1389, Skopje was captured by the Ottoman Empire and for the next 500 years it was known by the Turkish name Uskub, capital of the Vilayet of Kosovo.

The medieval city was once again damaged by an earthquake in 1555, but it soon recovered and prospered. But no sooner had it recovered from its losses, in 1689 the city was burned by the Austrian general Piccolomini—supposedly to eliminate an outbreak of cholera, but more believably to revenge the Ottomans’ 1683 attack on Vienna. The fire raged for two days and except the massive stone buildings, the city was completely destroyed.

The city was a major centre of rebellion against the weakening Ottoman Empire, and the Ottomans were expelled from the city in 1912 by the local Slavic population. The city was then captured by the Serbs, Bulgarians, and seized by Yugoslavian troops in 1944. It was stuck by yet another destructive earthquake in 1963 measuring 6.1 on the Richter scale. Eighty percent of the city was destroyed by the earthquake, and numerous cultural monuments were seriously damaged. 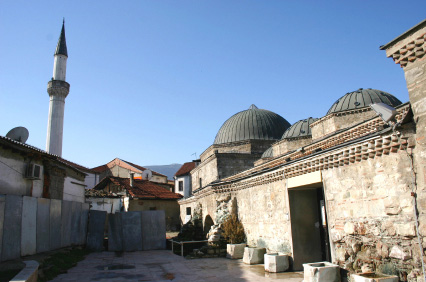 In 1991 the Yugoslav federation broke up and Skopje became the capital of the independent Republic of Macedonia.

Sights around Town
All around the town, you can find sights and monuments full of rich history and heritage of this magnificent city. Here is a rough guide of the major crowd pullers around the town, but if you care to explore and dig a little deeper, you will find there are many more treasures lurking beneath the surface.

The Kale Fortress dominates the city. It was built of stone blocks from the ruins of the city of Skupi. From the 14th to 20th centuries, the Ottomans used the fortress as a military barracks expanding the number of towers to seventy of which just three survive today. The 1963 earthquake destroyed much of the fortress. The fortress is now a park and has a wonderful view on the city and the river Vardar. The eastern gate gives access to a high field surrounded by the ruins of the walls, of which the 120-m-long cyclopic wall is the oldest.

An ancient Roman aqueduct still survives to the north of the city, just 2 km north-west from Skopje. One of the stone bridges connecting both sides of the Vardar River dates back to the early 14th century. The aqueduct was built of stone and bricks, with 55 arches supported on massive pillars. Another more famous bridge is the aptly named Stone Bridge in the city square built in 1469 and is the emblem of the city today. It spans the Vardar River with 13 arches. The 214 m-long structure was built by the Ottomans just after 1450.

Since the city was ruled by the Ottomans, there are several mosques to be found here. The Mustapha Pasha’s Mosque stands out as one of the most beautiful buildings of Islamic architecture in Skopje. It is located on a hill facing Fort Kale and was built in the end of the 15th century. Mustapha Pasha was an eminent figure in the Turkish state during the time. His mausoleum is located by the mosque and the engraving on it shows him to have died in 1519. The inside of the mosque is mostly decorated with stylized plants and the walls of the praying space are covered with calligraphic inscriptions with the names of Allah, Mohammed and his followers, and quotations from the Qu’ran. The tall minaret made of cut stone makes the impressive structure stand out even more.

The Isa-Bey’s mosque was built as a will of Isa-bey after his death, according to an inscription here. Contrary to most mosques, this one has two domes and is covered in lead. It is truly a one-of-its-kind structure that shouldn’t be missed. 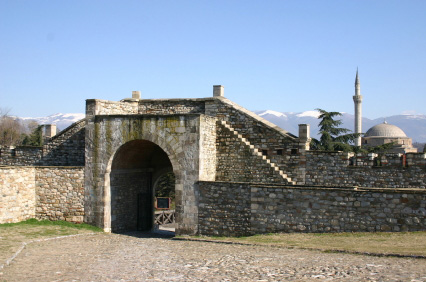 An old gate with an Ottoman mosque in the background

One of the newer attractions in the city is the Millennium Cross on the peak of the mountain Vodno. It stands at a height of 66 m and is one of the biggest crosses in the world, which can be seen from a distance of up to 30 km.

The Daut-Pashin amam was a Turkish bath was built by the grand vizier of Rumelia, Daut Pasha in the 15th century. In was originally used as a harem and later as a public bath. Today, it is an art gallery with works of many Macedonian icons from the 14th to the 19th century.

Kursumli An is a memorial of Mula Musledin Hodza, and has monumental, decorative walls with numerous domes in shape of pyramids. Today, the complex of the Museum of Macedonia is located within the Turkish bath. The yard is used for cultural functions during the summers.

Not far from the city, you will find the church of Saint Panteleimon, which was commissioned by members of the royal Comnenus family and completed in 1164. This region is famous for its frescoes, representing a pinnacle of the 12th-century trend of intimacy and spirituality. These murals have recently been restored to its original glory.

The Monastery of St. Panteleimon is located on 8 km from Skopje, in Upper Nerezi. The church is devoted to St. Panteleimon and was built in 1164.
On the walls of this church, you will find a gallery of masterpieces from the Bysantium period. In the yard, there are the palaces surrounded with high walls.

The St. Nikita Monastery was built in 1370 upon the foundations of an older church. The painting inside is the work of famous Macedonian woodcarvers, Mihailo and Eftihie. The walls of the church are adorned with their frescos, where saints are shown in their actual height. The compositions show the ‘Christ Miracles’, ‘The Secret Dinner’, ‘Curing of the Young Woman’, and other episodes from the bible, in a realistic way.

The St. Spas church was built around the 17th century upon foundations on an older church. Part of the frescoes on the southern side is from the original church from 16th century. In contrast to the relatively modest façade of the church, the iconostasis inside is truly spectacular, measuring 6 m high and 10 m long.

The Church of the Holy Savior huddles behind a massive wall with just the wooden bell tower sticking out. Steps lead down from the courtyard to the tiny church which was built here in the early 19th century on the ruins of an earlier church which fell victim to the fire of 1689; some of the old frescoes are still visible today. The church is known for its wood carvings, which are some of the best Macedonian carving craft around. The 19th century iconostasis carved in walnut, has biblical depictions as well as regional flora and fauna. Inside the compound there’s the grave of Macedonian revolutionary Goce Delcev in whose memory there is a small museum too.

The St. Kliment Cathedral is a modern Orthodox Cathedral building also known as the Ministry Temple, with Saint Clement of Ohrid as its patron. Built in 1972, the building consists solely of arches and domes. It has a massive chandelier hanging from the roof, which features a 70 sq m painting by Jesus Pantocrator. One of the eyes in the painting itself measures a massive 1.5 m!

On the left side of the river is the old Skopje bazaar where you will find small handicraft shops. The craftsmen can still be seen and the marketplace is always bustling with activity. Here, on the first floor of a 15th-century inn, the Bazaar Museum gives you an insight into Skopje’s importance as a trade town. Old photos and maps show the extent of the old bazaar, which once stretched all the way to the river Vardar. They also show the wealth of products that were manufactured or passed through the bazaar. What is remarkable is that the bazaar has barely changed at all through the ages. The museum is one of the few places showing photos of the city’s earthquake damage.

The City Museum is located inside of the remains of an old train station and features two collections—one offers a brief insight into life in the city before WWII, and some fine examples of ancient artifacts dug up in the vicinity. The pride of the museum is a 6000-year-old, 15cm-high clay statue titled ‘Adam from Govrlevo’, which was discovered in 2000. The statue is ranked among the world’s top 10 Neolithic artifacts, as it is perhaps the earliest representation of a human figure—with ribs, spine, belly button and an impressive erection!

The Contemporary Art Museum is housed inside a large, Polish-designed box! The 5,428 sq m museum is filled with fine examples of world art. Its permanent collection features over 3,000 pieces by artists from over 60 countries, and includes works by such greats as Picasso, LeWitt and Hockney.

Skopje was the birthplace of Mother Teresa and the Mother Teresa Museum is a small shrine to the great social worker, containing photographs, paintings, a model of her birth house and a prayer corner.

The National Museum is housed in a large white building with the main entrance hidden in the courtyard. Its ethnographic section has a stunning collection of instruments and traditional costumes, arranged by the region of origin in Macedonia and surrounding territories. There are also some women’s bridal costumes on display, weighing up to 40 kg. In the archaeological section there are rows and rows of pottery, jewellery, and statues, in particular, the clay fertility statue and the unique 6th century terracotta icons—the only one found in Macedonia and Tunisia. The museum also showcases priceless collection of icons, some dating as far back as the 11th century. Here you will see the famous Bogorodica Pelagonitisa icon from 1422, which was painted for the icon screen of the Zrze monastery and depicts a playful Jesus in the hands of his mother.