Paris – The City of Love & Lights

Paris is the capital city of France. It is also said to be the city of lovers…the most romantic place on earth, and French is the language of love. With so much love around, you are bound to enjoy your stay here. The city is situated on the River Seine in northern France, and its location at a crossroads between land and river trade routes has made it one of the principal cities of Europe.

Paris is one of Europe’s foremost centers of learning and the arts and is a major influence in politics, fashion, business, arts and science. The metropolitan area forms an irregular oval beyond the city limits, extending along the Seine and Marne rivers from the city’s south-east and east, and along the Seine and Oise rivers to the city’s north-west and north.

Stroll along its breezy boulevards, gaze upon impressive monuments, ogle at great works of art, and savor its gourmet selection of cheese, chocolate, wine and seafood. In winter the city is alive with numerous cultural events and during the warm and lazy summers, you can tour its many museums by day and roadside cafes by evening. In August, most Parisians head for the beaches. Bastille Day and towards the end of the year are the busiest times of the year, so keep that in mind while planning your vacation. 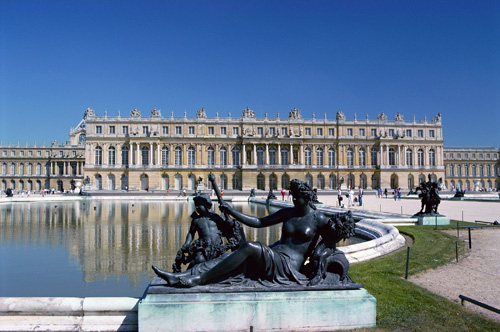 Statues by a Fountain at the Louvre

Historical Background:
The name Paris comes from its pre-Roman inhabitants, the Gaulish tribe known as the Parisii who founded the city around 3rd century BC. The city was called Lutetia during the beginning of the Roman occupation, but Paris replaced it towards the end. It is now also known as ‘The City of Light’ (La Ville-lumiere), since it is known to be a centre of education and also because of its early adoption of street lighting.

Around 52 BC, Julius Caesar took over the city and around the 2nd century AD, Christianity was introduced. The Romans were ousted in the 5th century by the arrival of the Franks. During the Middle Ages, Paris flourished. However in the 9th century, Scandinavian Vikings began raiding France’s western coast and these conflicts gave birth to the Hundred Years War between Norman England and Paris’ Capetian dynasty. The French were defeated and the English gained control of Paris in 1420. In 1429, the French troops defeated the English at Orleans led by a 17 year old, and the English were finally expelled from France in 1453.

The Renaissance was Paris’ golden era. Many of the city’s notable monuments were built during the period. But the peace didn’t last long. By the late 16th century, clashes broke out between the Huguenot Protestants and Catholic groups and in 1572, 3000 Huguenots were massacred on St Bartholomew’s Day to celebrate the wedding of Henri of Navarre (King Henri IV).

Louis XIV, known as the Sun King, ascended the throne in 1643 when he was just five years of age and remained in power until 1715. During this period, he nearly bankrupted the national treasury with his excesses! This led to an uprising in 1789 and brought about the French Revolution.

After the revolution, the government came under Napoleon Bonaparte who was crowned Emperor of the French by the Pope in 1804. His greed for acquiring more territories, eventually led to his downfall in 1812 during the battle of Waterloo in Belgium, after which he was exiled.

By the 1930s, Paris was the centre for avant-garde art and freethinking intellectuals. The period of boom was once again cut short by the Nazi occupation of 1940, when Paris remained under Germany until 1944. But since then, there has been no stopping this city that continues to be the Mecca for artists, poets and lovers, who never miss a chance to get inspired by the beautiful city and all that it has to offer.

Sights Around Town:
Take your own sweet time to explore Paris, because there are just too many things too see and each requires special attention. You cannot just look at the grand medieval abbeys, gothic masterpieces, classical architecture, and a remarkable density of artistic and cultural treasures—you need to spend time to savor and understand the depths of each piece of glorious history. 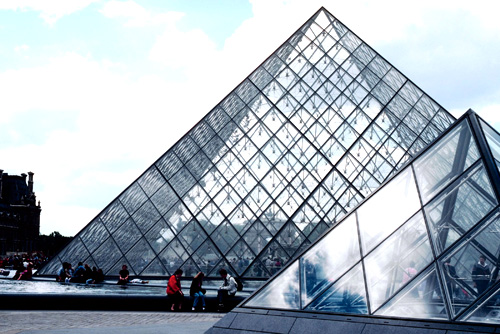 Glass Pyramids at the Louvre Courtyard

The Louvre is one of the finest museums in the world of art. It is actually several museums rolled into one. It holds treasures from the Egyptians, Etruscans, Greeks, Romans, Middle Eastern and Islamic cultures. The main attraction though, is the western painting and sculpture gallery in the vast Denon wing with around 6,000 of the most famous paintings in the world on display. Its two most celebrated works, the Mona Lisa and Veronese’s lavish Wedding at Cana are the most looked upon. After the release of the bestselling book ‘The Da Vinci Code’, the queues to enter this museum have become even more extensive.

The Musee d’orsay is home to the great artists of the 19th century. It was originally a train station but now houses a huge treasure trove of art—paintings by Delacroix, Degas, Corot, Manet, Monet, Renoir, Pissarro, Gauguin, Cezanne, Van Gogh, Toulouse-Lautrec and many others.

The Rodin Museum houses his personal collection in a charming hotel with a sprawling garden where the sculptor lived in his later years. The Kiss, the Cathedral, the Walking Man and portrait busts are some of the exhibits here, among paintings by artists such as Van Gogh, Monet, Renoir, Carriere and Rodin himself. Among the greenery in the gardens, you will also find Rodin’s sculptures such as the Burghers of Calais, the Gates of Hell and the Thinker.

Les Invalides & Musee de l’armee has an imposing gilded dome and was once a hospital for wounded soldiers. The two connecting churches, the Eglise St. Louis and the Eglise du Dome were for the soldiers and the king respectively. Since 1840, the latter has been dedicated to Napoleon, whose body lies here. The complex also contains the Military Museum.

Monuments:
Paris’ towers, churches, palaces, archways, bridges and fountains are renowned worldwide for its splendor and beauty. These monuments relate two thousand years of the capital’s glorious past.

The 300m high Eiffel Tower is probably the most famous landmark in the world, and is the capital’s most visited attraction—ironic for a structure that was intended to stand for just a few months. The cast-iron tower was built for the 1889 World Fair and the centenary of the 1789 Revolution and was named after its designer, Gustave Eiffel. It took over two years to construct using some 18,000 pieces of metal and 2,500,000 rivets. It was the tallest structure in the world until New York’s Empire State Building was constructed in the 1930s. 20,000 flashbulbs light up the edifice at night making it even more stunning.

At the Pere-Lachaise Cemetery you can see the graves of Jim Morrison, Oscar Wilde, Colette and Edith Piaf reside among the thousands of tombs in the city’s enormous cemetery. It is not as gloomy as you might think. People come here for a quiet stroll to reflect and ponder among great minds.

The city’s catacombs are used to store the exhumed bones from overflowing the Paris cemetery. The 3,000-km network of subterranean passages runs under the city, and not for the claustrophobic and the squeamish. The bones of about six million people were said to be residing here!

Under the Arc de Triomphe lies the grave of an unknown soldier. Napoleon ordered its construction in 1809 as a monument to the Republican armies. The arch is 50m high and 45m wide and bears the names of Napoleon’s victories, and is decorated with a frieze of battle scenes and sculptures, the most famous of which is ‘Departure of the Volunteers’, depicting the departure of volunteer forces after the French Revolution. The arc is the starting point of the annual Bastille Day military procession. 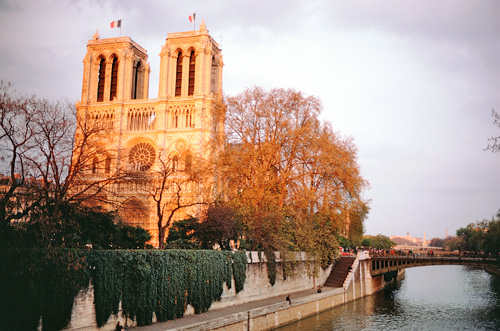 The impressive Notre Dame Cathedral was the inspiration for Victor Hugo’s novel The Hunchback of Notre Dame and is a masterpiece of Gothic architecture. It was constructed between 1163 and 1334, with a huge investment of time and money which was a reflection of the city’s prosperity at the time. It was plundered during the French Revolution and since the 19th century, restoration works have been going on to restore its former glory. It was here that Henry VI was crowned, Napoleon declared himself Emperor, and it also hosted the beatification of Joan of Arc.

The Sacre Coeur church is perched atop the highest point in Paris and affords spectacular views of the whole city, and is a favorite among artists who spend hours painting the perfect picture of the city. The church is crowned by a distinctive 83 m dome, and a 84 m high bell-tower shelters an 18.5 ton bell with a 850 kg clapper. Inside you will find works of art such as marble sculptures, stained-glass windows, and mosaics.

The Pantheon is the final resting place for the great heroes of the French Republic and also offers a marvelous view of the city. This neo-classical mega structure was commissioned by Louis XV to thank Saint Genevieve for his recovery from illness. By the time it was ready in 1790, the structure was rededicated as a ‘temple of reason’ and resting place of the nation’s great men, as a result of the revolution. Interred here are greats like Voltaire, Rousseau, Hugo, Zola and Malraux.

There are 35 bridges built along the axis created by the Seine and represent great historical events and meeting places. The most famous among them all is the Pont-Neuf (New Bridge). It was one of the first of the modern bridges in Paris and its construction marked the end of the Middle Ages. It linked the Louvre, the Saint-Germain Abbey and the Left Bank. It is 238 m long and 20 m wide divided into two sections separated by the divider where the Henri IV statue stands.