Lima – the Gateway to Peru

Overview
Founded by the Spanish conquistador Francisco Pizarro in 1535 and originally named as Ciudad de los Reyes or “City of Kings”, the city of Lima enjoyed great prestige and influence as the capital of Spains South American empire. Peru broke away from the Spanish empire and declared independence in 1821.  The Spanish influence is overwhelmingly apparent in the old colonial buildings that still dot the Plaza de Armas, designed by Pizarro.

The city is sandwiched between the Pacific Ocean on one side and the Andes mountains on the other.  It is the second largest city in Peru, with 8 million inhabitants –that’s a whopping two thirds of the country’s population, many of who flock here in search of employment opportunities and end up in the slum colonies on the outskirts of the city.  Like many South American cities, it’s congested and polluted, and has a gaping rich-poor divide,  but a few days spent walking about Lima will open your eyes to the old world charm and beauty of this 400 year old city.  Its San Francisco convent and historic center have been declared as world heritage sites by UNSECO.

The city is a history buffs dream with its rich museums and churches and important pre Inca archaeological sites. In addition, there are excellent restaurants that showcase Peruvian cuisine, especially the seafood the country is famous for, great casinos and gambling centers, fabulous nightlife and cultural entertainment that is unparalleled in much of the region.  Plus, the people are helpful and hospitable, typical of Latin warmth and friendliness.  The concept of rain is alien to Limenos and the city enjoys warm weather all year round. 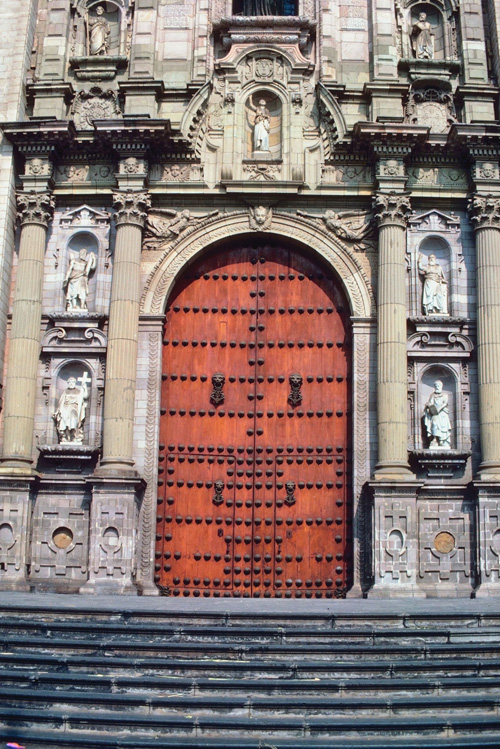 Door of the National Cathedral, Lima

Getting In
Lima is, in effect, the gateway to Peru. Its Jorge Chavez International Airport serves as a transit point to all the regions in the interior of the country and is well serviced by most international airlines to cities like Miami, Houston, Atlanta, Madrid and Amsterdam.  Once inside the airport, hire a taxi at the taxi counter to get to your accommodations.  Avoid the informal taxis outside the airport. There is an airport shuttle service available at the shuttle counter inside the terminal that ferries travelers to hotels from the airport. The Green Taxi counter at the terminal is also highly recommended.

Getting Around
The architectural splendor of downtown Lima demands that you walk around the city oohing and aahing at the colonial treasures that fill it.  If that sounds like too much exertion for someone on holiday, hire a taxi. They are really affordable and $2 should get you to an adjacent neighborhood.  For longer rides, you may have to shell out between $3 to $5. Always negotiate fares before getting into one and never get into a shared taxi. They are also buses and combis – vans crammed with up to 20 people. You can catch one at the end of a block or try stopping one at a traffic light.  They’re generally slow, so opt for a taxi if you’re in a rush.

Where to Stay
The city is a backpacker hotspot for those looking to do the Inca hiking trails and so, offers plenty of low priced lodgings. There are a number of budget hotels in the city center. If you’re looking for more comfort for your dollar, the more expensive hotels in Miraflores and San Isidro are the places to head.

Hotel espana in central Lima has dormitory beds at unbeatable rates. The Stop and Drop Lima Backpacker Hostel and Guesthouse is in the heart of Miraflores, close to where all the action is and has beds as cheap as $9. They also offer a number of adventure sport activities and Spanish language courses. Another backpacker hangout in Miraflores is the LOKI Backpackers Hostel.

The Posada del Inca Hotel in San Isidro has spacious rooms – they have a healthy occupancy rate, so book ahead. The Bellavista de Miraflores offers mid priced accommodation in the heart of the commercial and nightlife district of Lima.

The Country Club Lima Hotel is a grand structure built in the Spanish hacienda style and is stuffed with antiques and modern conveniences. The hotel is surprisingly fair priced considering the privileges – 3 restaurants and a bar, salon and access to the nearby Lima Golf Club.  Part of a successful Peruvian chain of hotels, the Libertador San Isidro Golf Hotel is boldly decorated and has a nice top floor restaurant and bar. Facilities include a Jacuzzi, gym and sauna.

Where to Eat
Peru’s capital offers a varied range of dining options from traditional seafood based Peruvian food to international cuisine.  The number one dish that no visitor should leave without trying is ceviche, pieces of raw fish marinated in lemon juice, all topped off with sliced onions. Ceviche is the national dish of Peru and is made only from the freshest fish. You’ll find cevicherias at every corner; from the beachside shack where it costs a few dollars to up market restaurants where you’ll pay many times that amount for the exact same concoction. There are also plenty of other seafood varieties that show up on Lima restaurant menus.  The prime location of the city above ocean waters means that fresh fish is not only plentiful, but the diet of plankton that’s abundant in these waters makes them extra delicious.   Besides local eateries, there are hundreds of Chinese joints as well as more expensive Japanese restaurants.  Middle Eastern food stalls are also common along Parque Kennedy. For a more upscale dining experience head to Astrid Y Gaston, which has the best collection of wines in the city or the serene El Curtejo, named after an obscure mission of monks.

The Pisco sour, made from fermented grape juice is the national drink of the Peruvians and available all over the city. Like Ceviche, it is highly recommended for a full blown Peruvian experience.  You can also try a variety of fruit juices including a mixed fruit juice called surtido.

Nightlife
The Barranco neighborhood is the center of Limas nightlife activity and boasts of a number of dance clubs and bars that come alive after dark. For sophisticated partying, head to the Costa Verde in Barranco where all the beautiful people go. In Miraflores, the younger party animals head to El Cocodrilo Verde with its scattered café tables and choice of jazz and rock and every thing in between. Some of the most crowded night time destinations on weekends are the penas, small bars that play musica criollas, a thumping medley of Peruvian and African influences. Keeping time to the beats are flashily dressed dancers and the mood is boisterous. The Freiheit Bar is a German tavern style watering hole in Miraflores and has a small dance floor.  The Son De Cuba is Caribbean themed in the choice of music and O’Murphys Irish Pub is obviously, the place to head for Guinness on tap.