Overview
All the clichés used for modern world cities that are born out of a lavish history are true for Istanbul – and then some. The city is secular and spiritual, fabulously wealthy with pockets of mind numbing poverty, dizzyingly modern and quaintly traditional, all in the blink of an eye. Young girls on the streets dressed in mini skirts and stilettos, gather disapproving looks from veiled women and old men with prayer beads. Conquered by three of the mightiest civilizations in history and coveted at different periods by many others, Istanbul has left much of its fossilized city status behind and is fast gaining a reputation as a nightlife hotspot in the region. Europe and Asia are almost fused together in this city, separated only by a 29 kilometer stretch of the Bosporus. Istanbul’s Asian half is home to sprawling suburbs while the European side is a cultural sojourners dream – magnificent palaces and mosques and bustling Turkish bazaars. Sip a cup of Turkish coffee at a roadside café, or inhale aromatic fumes from a hookah. Haggle at the many street shops and gawk at the city’s architectural wonders. Once in Istanbul, it really doesn’t matter what you choose to do – the city will get under your skin in a way few travel destinations can.

History
Istanbul was founded by Byzas the Megarian in 667 B.C. In 512 the city passed in to the hands of the Emperor Darius of Persia, beginning a long and tumultuous history of occupation by various conquerors. The Spartans grabbed hold of the city in 479 B.C., before it was added to the Athenian empire. Philip of Macedon attempted to take over Istanbul in 340 B.C., but his designs were thwarted by the locals. His son Alexander the Great was luckier than the father and was successful in adding this Turkish gem to his list of acquisitions. Upon his death, Istanbul was added to the mighty Roman Empire, where it stayed until the split of the Roman Empire into two in the year 395 B.C. Istanbul was chosen as the capital of the Eastern Roman empire, more commonly referred to as the Byzantine Empire. In 1453, the Ottoman King Mehmet II wrested control of the city and anointed it capital of the Ottoman Empire. In 1923 Turkey’s strong man Kamal Ataturk established the Turkish Republic with Ankara as the chosen capital. Istanbul however remains the financial, commercial and tourist hub of the country.

Getting There
Trains from European cities arrive at Sirceci station while those from Asia arrive at Haydarpasa station. With cheaper fares, air planes are the best way to get into Istanbul. The Ataturk International Airport is serviced by all major airlines and includes a 24 hour pharmacy and clinic, ATMS, money exchange facilities, car rental desks and even a kiddie’s play area. Once at the Airport, take a taxi cab to the city center. For those on a budget, there’s a train service from the airport to the Zeytinburnu area, from where you can connect to Sultanahmet by tram. There’s also a shuttle bus service from the airport to the Taksim neighborhood. Many Istanbul hotels, however, offer pick up and transfer facilities for guests – check ahead to see if your hotel offers such services. 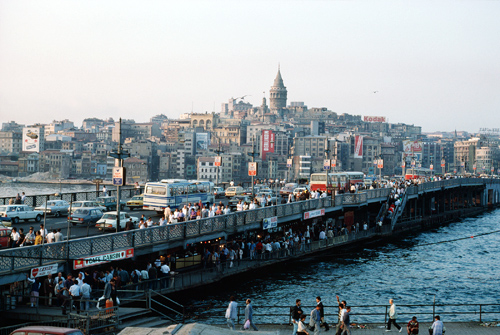 Getting Around
Istanbul’s metropolitan bus system provides an economical means of transport around the city, albeit a little difficult to navigate. The name of the destination and the intermediate points serviced are displayed above the front windshield of the bus, but won’t help you if you’re a first time visitor, unfamiliar with the layout of the city. The dolmus is the local mode of transport and is cheaper and can convey you to your destination quicker than a bus. Tell the driver where you want to go when you get in and also the fare for your destination. Istanbul’s tramways are perfect for those planning to camp in the Sutanhamet area. The city’s metro system is, however, a little more basic, but because the streets are so congested most of the time (you’ll find rush hour traffic even at midnight), traveling by metro will get you to your destination faster than road transport. Most of the top rental car companies have their presence in Istanbul, but you would have to be either insane or have nerves of steel to attempt to drive yourself around. Traffic rules are at best optional, there’s hardly any parking space and the road signs are mostly in Turkish. Too much hassle for a holiday. Hire a taxi instead. They are plentiful and most hotels will gladly arrange one for you. Avoid the taxis that gather around tourist spots – these are the ones most likely to fleece gullible visitors.

Where to Stay
Taksim is where most of the shopping and nightlife activities are centered. Sultanahmet has traditionally been the place to set up camp for foreign visitors but many establishments here have recently hikes up their rates dramatically. The Harabiye area has a number of budget and mid range hotels.

Where to Eat
For the best dining options in town, head out of the more touristy areas towards the restaurants in the Beyoglu area and Taksim areas. These eateries have a regular clientele of locals so they are unaffected by the tourist trade. Perfect for simple Turkish food and a few drinks. 24 hour doner restaurants serve delicious fare for those on a budget. The city’s international appeal ensures that you’ll never run out of places that include Western favorites on the menu.