Harare – formerly known as Salisbury, the Capital of Zimbabwe

Harare is the capital city of the land locked country of Zimbawe in Africa. It was formerly called Salisbury. The origins of this beautiful, sunlight dappled city situated on Zimbabwe’s central plateau can be traced to 1890 when it was founded as a fort by the Pioneer Column which was a mercenary force established by Cecil Rhodes. The fort was christened Salisbury after the third Marquis of Salisbury. The fort became a municipality in 1897 and a city in 1935; it reigned as the capital of the Federation of Rhodesia and Nyasaland from 1953 to 1963.

On April 18, 1982 the date of the second anniversary of Zimbabwe’s independence, the name of the city was changed from Salisbury to Harare. It is thought that the name was derived from the name of a ‘Shona’ chieftain Neharawa. The Shona tribe were the early inhabitants of Zimbabwe and the various autonomous Shona tribes combined together to form the Rozwi state which contained most of present day Zimbabwe in the early 19th century. Another origin of the name is said to be the European pronunciation of the word “Haarari” which means “he does not sleep”. The term was used to describe the chieftain of an area which is today known as Koppie, this chieftain was rumored not to have slept due to which nobody could ever launch a stealth attack on him.

History and the current turmoil
The country of Zimbabwe has been historically known for its various rich natural resources such as gold, copper and silver. Gold mining has attracted settlers to the area through the ages. In the early 19th century when the Shona established the Rozwi state in most of present day Zimbabwe, they suffered an attack in 1834 when the Rozwi leader was assassinated by the Ndebele invaders. The Ndebele established a state whose capital was at Bulawayo. Cecil Rhodes and other European settlers also began to move into the area at this time lured by their greed for gold mining and ivory hunting. These white settlers had the sanction of Queen Victoria of England. As the settlers grew in number, the country came to be referred as Rhodesia in 1895.

The natives of the country were not amenable to the rule of the colonists and there were numerous struggles against the rule of the white colonits. These struggles intensified in the early twentieth century especially in the 1920s and 1930s. The African natives were denied the right to own land or to participate in skilled trade and professions. Instead they were forced to work on farms and mines and factories owned by the white folk for poor wages and deplorable conditions. This led to widespread rebellion and the launch of the African national parties. This struggle continued during most of the early twentieth century culminating in 1980 when the Marxist President Robert Mugabe came to power and the country achieved independence in 1982.

The rule of Robert Mugabe who wished to establish a one party rule in Zimbabwe has been marked by much strife. The citizens of Zimbabwe have become increasingly dissatisfied with Mugabe for his corrupt ways over the years but he has survived opposition through dirty politics and intimidation of the local population. Harare saw people rioting on its streets in 1998 but these rebellions were effectively crushed by Mugabe. Mugabe has brought in legislation which has brought much strife in the country and made the deteriorating economy a cause of international concern and scrutiny. In the year 2000 the lands owned by the whites were seized by squatters, in 2002 Mugabe passed additonal legislation which displaced a further 3000 white landowners from their farms. Subsequently the white landowners have been prevented from appealing against this acquisition of their land. This forced acquisition of farm lands has led to a shortfall in production and it has destroyed the economy of the country. President Mugabe continues to rule with an iron fist in spite of efforts of rival factions who are constantly plotting to oust him. There have been presidential elections in 2002 and parliamentary elections in 2005 but Mugabe continues to preside while the country has continued to slide into turmoil. In Harare essential services such as rubbish collection and road repairs have steadily deteriorated. The city of Harare once beautiful and sunshine filled has come to resemble a shanty town. In May 2005 the government launched the Operation Murambatsvina (Operation “Drive out Trash”) in Harare and other urban centers. This has caused much outrage in the international community as the urban poor were driven out and their shanty homes destroyed without warning and without provision for alternative accommodation. It is thought Mugabe launched this drive to punish the urban poor and limit their support for the opposition Movement for Democratic Reform. In 2006,Mugabe introduced the Operation Chikerama( Operation “Better Living”)which consisted of building concrete shacks to house these urban displace poor but these shacks are without the basic civic amenities in areas which are inaccessible by existing infrastructure. All this turmoil has made the international traveler wary about visiting Harare and the rest of Zimbabwe in recent times. This is a sorry state of affairs as the country has some of the most magnificent sights such as the natural wonders of the Victoria Falls and fabulous game viewing sanctuaries. Harare and popular tourist destinations such as the Victoria Falls have suffered the fall out of the violent demonstrations and the increase in criminality due to Mugabe’s controversial rule. 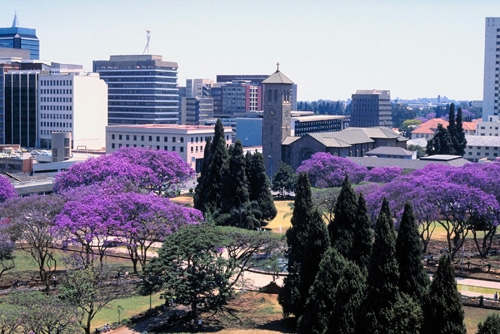 Visitor’s Caution
Visitors to Harare which is the gateway to the rest of Zimbabwe known for its the beautiful natural wonders such as the world heritage site at Mana Pools and the wildlife concentrated Zambezi valley should exercise caution while visiting the city. Visitors must bear in mind it is prohibited to take pictures of public buildings and government institutions or even the illegally occupied farms. All this could lead to one getting arrested. Caution must also be exercised when waving as the hand is the symbol of the main opposition party. Visitors to Harare must also be vigilant while visiting ATMs as present day downtown Harare is a center of high crime. Another more trivial warning that a visitor must bear in mind is that civilians are not permitted to wear camouflage clothing Hence a visitor must refrain from sporting camouflage no matter what fashion dictates.

Weather
Harare enjoys a somewhat tempered climate as compared with the rest of Africa. The summer months are from October to April. The capital which is bathed in sunshine has hot sunny days when temperatures range around 86°F(30°C),the so called winter months of May to October see milder temperatures of around 25°C(77°F) during the day as the nights turn much cooler. The winter months are the best months to visit the game parks and to go white water rafting on the Zambezi River. It is the busiest time of the year for tourist arrivals.

Language
English is the official language but it is spoken by a miniscule portion of the population. The native languages of Shona and Ndebele are spoken by the majority of the people.