Cologne – Klönisch Wasser or the Water of Cologne

Located on the River Rhine, Cologne is the fourth largest city in Germany. An important economic and trading center due to its strategic location and highly developed transport infrastructure, Cologne, today has a thriving media industry as well.

Cologne is the city which is famous for the origin of the Eau de Cologne or Klönisch Wasser which means water of cologne . It was created by Johann Maria Farina an Italian expatriate in the 18th century and named after his hometown which was Cologne. The fragrance was a runaway success. Wilhelm Mülhens, a merchant secured the rights to subsequently produce the fragrance at his factory at Glockengasse. His grandson later renamed the fragrance 4711 which symbolized the number given to the factory under the French occupation of the Rhineland in the 19th century. Today the fragrance is produced both by the eighth generation Farina family in Cologne as well as the company Maürer and Wirtz who acquired the brand in December 2006.

Like other German cities of Frankfurt and Leipzig, Cologne is also a center for Trade Fairs which are held at the fair grounds which include the state of the art Northern Halls. Some of the fairs held in Cologne are the Art Cologne Fair, Photokina, a fair showcasing the latest trends in the world of photography and the International Furniture Fair.

History
Cologne was founded by the Romans in 30 BCE. The city was given the status of a ‘Roman’ city in 50 BCE and it was renamed Colonia Claudia Ara Agrippinensium.

The city was ruled in turn by Postumus, Marius and Victornius as the capital of the Gallic empire from 260 to 270. The Roman Emperor Constantine who converted to Christianity built a bridge over the Rhine in 310 and in 313 Maternus was elected the first bishop of Cologne. Cologne occupies an important locale for followers of the Roman Catholic faith and its famous Cathedral is the seat of the Roman Catholic Archbishopric of Cologne. The Archbishop of Cologne occupied an important position in the hierarchy of the church in the middle Ages at the time of the Holy Roman Empire. In fact the city is an important pilgrimage destination as the Cathedral contains the relics of the Three Wise Men of the nativity fame.

The Second World War established Cologne as an important military command center for the Nazis as a result towards the latter part of the war it was relentlessly bombed by the Allies. This resulted in a mass exodus of the local population to the surrounding rural areas in order to escape this bombing. Earlier in the war, the Jewish population of the city had already been brutally annihilated by the Nazis. The main Jewish Synagogue of the city built by Wilhelm Schreiterer and Bernhard Below in1899,had been completely destroyed both by the Nazis as well as the bombing of the Allies ,it was rebuilt in the 1950s and it 2005 it featured in the papal visit of Pope Benedict XVI. The German born pope is only the second pope to ever visit a synagogue.

At the end of the Second World War the city had been reduced to a pile of rubble, many of the Romanesque churches and other important cultural landmarks had been destroyed.

The city was slowly rebuilt using the services of urban planner Rudolf Schwarz who helped to chalk out a plan for the development of a network of roads for Cologne in anticipation of projected vehicular traffic.

The most important road constructed during this time in the downtown area was the Nord-Süd-Fahrt (North-South Drive). Slowly over the years following the war the city was rebuilt and in time it saw its population grow. This network of transport infrastructure as well as the establishment of several media companies coupled with the success of the trade fairs saw Cologne prosper in the 1980s and 1990s. Media companies such as Westdeutscher Rundfunk(WDR) and Germanys largest private broadcaster RTL operate out of Cologne. The city has set up a Media Park to cater to the needs of these companies.

Climate
Cologne enjoys a temperate climate with warm summers, mild winters and rainfall all through out the year. The average annual rainfall received by the city is 760 millimeters with 50 and 75 millimeters being received every month. The mean daily temperatures in January are around 1°C (34°F) while in the summer months of July and August the mean daily temperatures are 20°C (68°F). 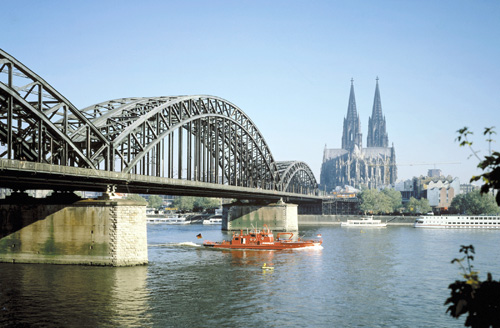 Language
The people of Cologne speak a local dialect of German called Kölsche, but English is also spoken and understood in this city which is warm and welcoming of tourists.

By Air
Cologne is served by the Konard-Flughafen (CGN) international airport. The airport is named after the former mayor of Cologne Konard Adenauer who was also the Chancellor of Germany. It is an important hub for several discount airlines that operate in Europe. The airport is shared by the neighboring city of Bonn which was the former capital of West Germany. The airport had large freight volumes as well. The Intercity Express train has a terminal in the airport on the Cologne-Frankfurt route. This provides a convenient link to the city of Cologne.

By Road
The city is very accessible by road due to the ring of ten highways that encircle it and provide important road links with the rest of the country and other areas of Europe.

This road development in Cologne which began as early as the 1920s along with the development of other infrastructural facilities has enabled the city to become an important economic and trade center in Germany.

By Water
The Rhine has five ports on it and Cologne has the second largest inland harbor of Germany, this makes it extremely accessible by water as well.

By Train
The City is equipped with two major train stations the Köln Hauptbahnhof and Köln-Deutz. The year 2003 saw the completion of the high speed routes to Frankfurt and Paris via Brussels so Cologne forms an integral part of the high speed rail network of Europe.

Getting Around
The city of Cologne is not very big and is served by very efficient subway/tram and bus system called “KVB” (Kölner Verkehrsbetriebe).

This system serves Cologne and neighboring cities. The city is not very big and easily accessible on foot. An hour’s journey by tram and subway can take you around all the tourist sites. Tourists can buy is a Köln Welcome Card which offers a variety of discounts at various attractions. The card can be bought for durations of 24 hours, 48 hours and 72 hours. It has to be stamped in order to be validated .There is also a convertible bus called the Hop on and Hop off bus which is accessible to card holders and helps one chart out one’s own journey to see Cologne’s various attractions. The Subway/Tram system is called the U- Bahn. The Regional trains are called “S-Bahn” and these require tickets to be purchased at the station as not all trains have vending machines. Cologne also operates the ‘Call A Bike’ scheme which is operated with the help of a credit card which enables one to pick up and drop off a red and silver bike at any one of the points in the city.