In a local newspaper, someone wrote in to say that Cape Town was the only city in South Africa that could rightly call itself a metropolis (Greek for mother city), and hence it gained its nickname of being a ‘mother city’. There was even a time when it used to be known as ‘Cape Grab’ and not for any illustrious reasons…it was because of the grabbing practices of innkeepers who charged exorbitant amounts from sailors who passed by the Cape on their way to the East.

Famed for its hospitality, in Cape Town you will find the gifts of nature in bountiful… it’s striking Table Mountain, glorious beaches and enchanting vineyards, rugged landscapes, and its wonderful and diverse array of flora and fauna…it’s enough to leave anyone spellbound.

Cape Town is the third most populous city in South Africa and is the provincial capital of the Western Cape, as well as the country’s legislative capital. The town was originally developed as a victual station for Dutch ships before the construction of the Suez Canal in 1869.

The city centre is located at the northern end of the Cape Peninsula with the Table Mountain forming a dramatic backdrop to the city bowl. The peninsula consists of a mountainous spine jutting into the Atlantic Ocean, ending at Cape Point. There are over 70 peaks above 1,000 ft (the American definition of a mountain) within the city limits. Many of the suburbs of Cape Town are on the large plain of the Cape Flats, which joins the peninsula to the mainland.

History
Cape Town has no written history till it was mentioned by Portuguese explorer Bartholomeu Dias in 1486. The first European settlement in South Africa was a supply station established in 1652 by the Dutch East India Company (VOC), which quickly evolved into a colonial settlement. Slaves were brought from Madagascar, India, Ceylon, Malaya and Indonesia.

Simon van der Stel arrived in 1679 to replace Van Riebeeck as governor and single handedly founded the Cape wine industry by bringing grape vines with him on his ship. The first non-Dutch immigrants to the Cape, the Huguenots, arrived in 1688 having fled from anti-Protestant persecution in Catholic France.

By 1780, France and Great Britain went to war against each other and eventually the British successfully invaded the Cape and announced the beginning of free trade. The natives were prohibited to move between regions without written permission.

British imperialist Cecil Rhodes stirred up rebellious sentiment among English-speaking minorities leading to the Anglo-Boer War. In 1910 the Union of South Africa was created, giving political control to the whites. Apartheid (the state of being apart) became a world issue and the suppression of black resistance included many atrocities by the whites.

The international community finally began to put pressure to abolish the apartheid regime, and after the 1989 elections, the new president FW de Klerk instituted a program that was aimed at democracy.

In 1994 Nelson Mandela was made president of the ‘new’ South Africa.

Sights
The city’s good weather and wealth of natural attractions and other monuments make Cape Town a major crowd puller. One of the most prominent features of the city is the Table Mountain, a part of the Table Mountain National Park and dramatically situated at the back end of the city. You can reach the top of the mountain by hard work, i.e. hiking, or by taking the Table Mountain Cableway. The cable car gives you a 360° view of Cape Town on the way up. But on the other hand, the trial is a hiker’s paradise, with walks of varying degrees of difficulty to suit nature lovers and serious rock climbers alike. Many prefer to drive along Chapman’s Peak Drive for good views of the Atlantic Ocean and nearby mountains. This World Heritage Site soars 1086 m above sea level. The mountain hosts a wide variety of indigenous flora and other wild flowers and in particular, the silver tree.

The Kirstenbosch National Botanical Gardens is known for its indigenous plants collection—over 5000 species, and for its magnificent location on the eastern slopes of Table Mountain.

The Good Hope Nature Reserve is located on the southern tip of the Cape Peninsula, and boasts 7750 ha of indigenous flora and fauna. Try spotting some from an extensive checklist that includes baboons, bonteboks, zebras, Cape grysboks, steenboks, grey rheboks, elands, springboks, grey mongooses and over 150 species of birds. Within the reserve is Cape Point where two oceans, Atlantic and Indian, are said to meet.

The Victoria & Alfred Waterfront is one of the city’s most popular shopping venues and also has the Two Oceans Aquarium, which represents some 300 aquatic species. The Port is operational and visitors can watch ships enter and leave. From the Nelson Mandela Gateway here ferries depart for Robben Island, Hout Bay, Simon’s Town and the Cape Fur Seal colonies on Seal and Duiker Islands.

Robben Island is one of the most significant historical sites in South Africa, and a national monument. It was originally used by the Dutch East India Company (VOC) as a refreshment base, and it later housed an asylum and leper colony. It gained notoriety as a prison and housed its most famous prisoner, Nelson Mandela. Original buildings have been replaced by new Victorian style structures. Here you can stroll through various shops, a variety of fascinating museums, craft markets, historical walking tours, enjoy an excellent selection of restaurants, theatres, and visit the Telkom Exploratorium.

Cape Town has the highest density of Cape Dutch style buildings in the world, which combines the architecture of France, the Netherlands, and Germany. You could take a walk down Constantia, the old government buildings in the Central Business District, and along Long Street, to marvel at the country’s rich architectural heritage.

The South African Museum was founded in 1825 and is the oldest and largest museum in the country. Exhibits include a fossil gallery, a Whale Well (that has a 20m long skeleton of a blue whale), the only example of a quagga foal, the Linton rock paintings, and the mysterious Lydenburg Heads among many other such treasures from our natural world.

The Company Gardens is the oldest garden in South Africa originally used as a vegetable garden to supply fresh produce to passing ships, established by Jan van Riebeek in 1652. A wide variety of indigenous and exotic plants, shrubs and trees, and an aviary are what it offers visitors today. The sundial here dates back to 1787 and the bell tower is from 1855. The gardens offer a walkway past the Houses of Parliament, the National Gallery and several museums, so you can make a day of sightseeing and picnicking here. 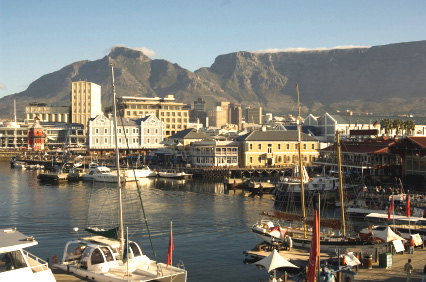 The Victoria and Albert Waterfront

Groot Constantia is the Cape’s oldest homestead and was originally allocated to Governor Simon van der Stel. Today the Manor House retains furniture and antiques dating back to the mid-1700s, and in the Wine Museum, a rare selection of wine vessels dating from between 500 BC and the 19th century can be seen.

Ratanga Junction is the country’s first full-scale theme park which offers unmatched entertainment for the whole family, providing hours of wholesome entertainment for people of all ages. The park is predominantly for families by day and adults by night—from 7pm to the early hours every night is party time!

Hout Bay is a traditional, working harbor with rustic fishing boats and the fishermen going about their daily business. The harbor boasts the Mariners’ Wharf containing an emporium of live lobster and fish markets, seafood bistros and restaurants, shell, souvenir, art and nautical-style shops, and old wine and liquor store, and a pearl-in-an-oyster outlet. For more entertainment, take a boat trip around the bay and watch the antics of the cape fur seals in the summer months or see the rare black cormorant and the common black-backed gull at the nearby Duiker Island.

Built out of Table Mountain granite as a tribute to Cecil John Rhodes, Prime Minister of the Cape from 1890-1896, Rhodes Memorial offers a magnificent panoramic view of the Cape Flats, False Bay and the Drankenstein Mountains. 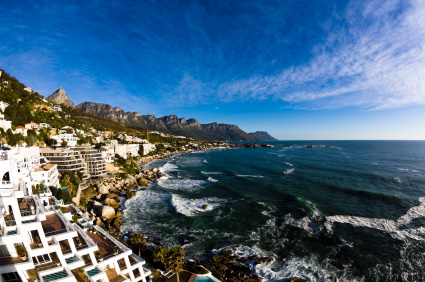 The city’s many clean beaches are considered among the best in the world, strikingly situated between the sea and mountains. Just 10 minutes away from the city centre you could relax at the Clifton and Camps Bay beaches. For those who prefer a little action, you can choose from a variety of activities like surfing, scuba diving, boardsailing and fishing. With the exception of Boulders Beach in False Bay, entrance to all Cape Town’s beaches is free.

If you are on a vacation with kids in tow, then there are several options to keep them occupied and happy. Take them to the World of Birds in Hout Bay or a camel ride in Kommetjie; watch the penguins at Boulders and the butterflies at Butterfly World; Jimmy Jungle and Never Never Land are great play areas; fly kites at Fish Hoek or Bloubergstrand or go indoor grand prix racing on go-karts.

If you prefer to be out on the town after the sun goes down then luckily, the night life of the city won’t disappoint you. You can opt for a range of restaurants and cafes that are generally recognized as some of the finest in the country. Night clubs and bars abound where you can let your hair down and party all night long.

Cape Town is ideally located for day trips around the region, offering a variety in landscapes and cultures. The Cape Winelands and the towns of Stellenbosch, Paarl and Franschhoek are popular day trips from the city for sightseeing and wine tasting. You could go whale watching for Southern Right Whales and Bryde’s Whales. The town of Hermanus is known for its Whale Festival. You could even spot dolphins—the endemic Heaviside’s dolphins and dusky dolphins. In Cape Peninsula, Boulders beach hosts penguin colonies and if you happen to be there in September, the breeding season, you can see penguins hatching out of their eggs. At Cape of Good Hope you could spot some baboons or ostriches in the magnificent natural setting.