Belgrade is an award winning city. Literally. It has been awarded the Legion of Honor, the War Cross, Karadorde’s Star with Swords, and the Order of National Hero. It is a mosaic built by centuries of overlapping civilizations. It is the capital and the largest city of Serbia, and is situated in South-Eastern Europe, on the Balkan Peninsula. It lies at the point where the river Sava merges into the Danube.

From the founding of the city, various peoples have fought for possession of it. Having stood on the path of many conquests from the East and from the West, Belgrade has been repeatedly destroyed and rebuilt. The river waters surround it from three sides, and that is why since ancient times it has been the guardian of river passages. Because of its position it was called ‘the gate of the Balkans, and the door to Central Europe’.

Built on the site of an ancient stronghold, Belgrade means ‘white fortress’. The first settlements in the area of Belgrade emerged in prehistoric Vinca in 4800 BC. The Slavic name Beograd was first recorded in 878 AD.

Belgrade has a moderate continental climate, with four seasons. Autumn is longer than spring, with longer sunny and warm periods. Winter is not so severe. 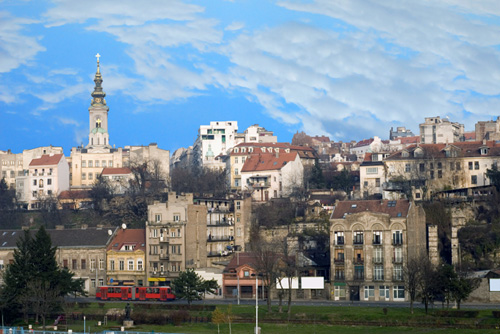 History:
Belgrade, a city of very tumultuous history, is one of the oldest cities in Europe with a history that goes back to about 7,000 years. The founding of Singidunum, a fortified settlement, is attributed to the Celtic tribe, the Scordiscs. Singidunum experienced occupation by successive invaders of the region—Huns, Sarmatians, Ostrogoths, Avars and the Slavs.

The first record of the Slavic name Beograd dates back to 878, during the rule of the First Bulgarian Empire. For about four centuries the city remained a subject of warfare till it finally passed to Serbian rule as a part of the Kingdom of Syrmia in 1284.

In 1389, the Serbian Empire began to crumble, and the south was conquered by the Ottoman Empire. However, the north, with Belgrade as its capital resisted for almost 70 years. Under Suleyman the Magnificent, it was finally captured and the city was largely razed to the ground.

Later, it was occupied by Austria thrice but was quickly recaptured and substantially razed each time by the Ottomans. With Serbia’s independence in 1878, Belgrade once again became a key city in the Balkans, developing rapidly.

After the World War I Belgrade fell to German and Austro-Hungarian troops after a prolonged battle that destroyed much of the city. The city was liberated by Serbian and French troops in 1918. After the war Belgrade experienced faster growth and significant modernization as the capital of the new Kingdom of Yugoslavia.

Yugoslavia was invaded by German, Italian, Hungarian and Bulgarian forces and the western suburbs were incorporated into the Independent State of Croatia. Most of the city remained under German occupation until 1944, when it was liberated by Communist Yugoslav Partisans and the Red Army. In 1945, Marshal Josip Broz Tito proclaimed the Socialist Federal Republic of Yugoslavia in Belgrade.

In the post-war period Belgrade grew rapidly as the capital of the renewed Yugoslavia, developing as a major industrial centre. In 2001 the outer wall of sanctions against Yugoslavia was lifted and Serbia got its first democratic government. The following year the Constitutional Charter of the State Union of Serbia and Montenegro was adopted and Serbia and Montenegro was admitted in the Council of Europe. Serbia got its first democratic president in 2004.

Sights:
Kalemegdan: High above the Sava and Danube confluence, on the rocky ridge, there is the Belgrade Fortress with Kalemegdan, the former historical and urban centre of Belgrade. The name Kalemegdan applies only to the spacious plateau surrounding the Fortress, which was turned into a park in the 19th century. World War I began there, when the Austrian artillery on the other side of the river began firing upon the Kalemegdan. When the Fortress served as Belgrade’s chief military stronghold, the plateau was a place from which the enemy was kept under observation and where preparations were made for combats. Its name derives from the Turkish words kale (field) and megdan (battle). The Turks also called it Fichir-bair, which means ‘the contemplation hill’ where you can sit and ponder in the serene environs.

Knez Mihajlova: This pedestrian shopping centre is protected by law as one of the oldest and most valuable monumental complexes of the city. A large number of buildings here have survived since the 1800s. It is thought that in the Roman times this was the center of the Singidunum settlement and at the time of Turks, there were winding streets with gardens, drinking-fountains and mosques here.

Skadarska Street: In the old city there are several streets with interesting shops and well preserved buildings. This pedestrian-only street still retains some of the appearance of the city, as it was in the 19th and early 20th century. Aromas from restaurants, bakeries and pubs draw you to their open air tables, art galleries, folk groups singing either gypsy music or traditional city music, and people dressed in traditional Serb costumes provide ample entertainment throughout the day.

Old Palace: Built in 1884, the Royal Palace of the Obrenovic dynasty of Serbia, now houses the City Assembly of Belgrade. The Palace was damaged twice during the World Wars but has now been restored.

Parliament of Serbia: The construction of the palace began in 1907 but didn’t finish till 1936. It was designed with rich interiors made by some of the most famous artisans and craftsmen of the time.

Ada ciganlija: A river island on Sava with an artificial lake in the centre of the city, it has an 8 km long beach and has the capacity to accommodate about 3,00,000 beach-goers.

Parks:
Belgrade Zoo: Also called the Good Hope Garden, is nestled in one of the most attractive city locations—the Kalemegdan Park. It was founded in 1936 and it is one of the oldest homes in Europe for furry creatures. It covers an area of 6 ha, and has over 2,000 animals of more than 200 species.

Pionirski Park: it is considered to be one of the most beautiful parks in Belgrade. Until 1944 it was surrounded by a high wall and served as a garden of the Old Palace. The wall has now been removed and the park is available for public use.

Tasmajdan: This used to be a large stone-pit (in Turkish tas meaning stone, majdan meaning pit). It is said that most of the older buildings in Belgrade have been built by stones excavated here. In the catacombs left after the excavations of stone blocks, arsenals and military warehouses were built and they have also been used as shelters for wounded soldiers.

Univerzitetski Park: It is located at the very center, in the old core of the city. During the Turkish period, this served as their graveyard but was removed in the 19th century. It was then one of the largest markets, part of which still remains on one part of the park today.

Karadordev Park: Many monuments have been erected in this park in memory of people and events that have shaped the city. This was one of the camps of the insurrectionist army during the attack on Belgrade in 1806 and after the conquest of Belgrade, all killed insurrectionists were buried here. Just before World War II, a shelter was built in the park, in which 192 innocent citizens were killed during the German bombing. A stone slab stands in memory of that tragic event. 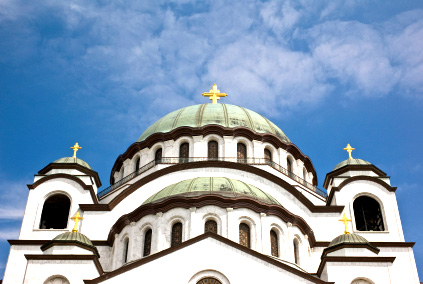 Sveti Sava Temple: The largest Orthodox Church in the world has been under construction for over 50 years. A beautiful park surrounds it. The site includes the statue of Karadorde (Black George) and Saint Sava.

Church of the Holy Mother of God: In the time of Despot Stefan Lazarevic there was an old church of the same name, which was destroyed when the Turks conquered Belgrade in 1521. The church was a gunpowder storage in the 18th century, and was used as a military church in 1867. It was heavily damaged after the World War I but restored in 1925 for visitors to marvel.

Saint Petka’s Chapel: It was built next to a ‘miraculous spring’ and its interior walls and vaults are covered with mosaics that are worth looking at.

Ascension Church: Built in 1863, the works inside were financed through donations of Belgrade citizens. The church has a rich collection of icons, old books, gold articles and other things from the 19th century.

Saint Mark’s Church: Built in 1940, it replaced an older church that was built in 1835. At the south part is a sarcophagus with the remains of the Czar Dusan. On the north side is a white marble crypt containing the remains of Patriarch German Doric. Some valuable Serbian icons from the 18th and 19th century are also kept in this church.

The Bajrakli Mosque: Built around 1575 during the Turkish times, its original name was Cohadzi-mosque, after the endower Hajji-Ali, a cloth merchant. During Austrian rule (1717-1739) it was converted into a Catholic church and then turned back into a mosque when the Turks returned. At the end of the 18th century it got its present name, after the flag which has been raised as a sign for beginning of prayers in all mosques.