The capital of the People’s Republic of China Beijing called ‘Jing’ for short is the epicenter of the nation’s political, cultural educational spheres as well as the center of international trade and communications. The city of Beijing is located in northern China close to Tianjin Municipality and is surrounded by Hebei Province. The capital today is a modern city, teeming with a population of approximately fourteen million people, but evidence of the old Beijing is still visible in its tea houses and temple fairs which co–exist with its towering skyscrapers, bustling shopping malls with their international retail outlets and its endless stream of traffic.

History
The history of the evolution of Beijing can be traced back over 500,000 years. Beijing was inhabited by the “Peking man”, an ancestor of modern humans.This history of evolution has been marked by invasions by warlords and foreign powers, fires and the rise and fall of dynasties. Imperial dynasties established their rule with Beijing at the helm. These were the Yuan Dynasty (1271-1368), the Ming Dynasty (1368-1644) and Qing Dynasty (1644-1911). A total of thirty four emperors presided over the country and ruled the nation from Beijing. In 1911 the Qing dynasty was overthrown by a revolution and power was seized by the Nationalist party. This was followed by a series of power struggles between warlords and the Nationalist party until China was invaded by the Japanese in 1937. During the Japanese occupation the Nationalist party banished to Chongging which was the temporary capital of China until the end of the Second World War and the defeat of the Japanese.

The Nationalist party tried to retake Beijing after the War but they did not succeed in their attempts for by then a full scale Civil war was raging in China. The Communists led by Mao Zedong came to power in 1949 and declared China as a ‘People’s Republic’ with a proclamation in Tiananmen Square. Mao’s rule saw Beijing stripped off its finery as temples and monuments were destroyed and the city’s walls were pulled down and in there place commemorative arches were erected. The rich Chinese culture and heritage was further destroyed in 1966 when Mao launched his Cultural Revolution. This chaos continued until 1979 when Deng Xiaoping came to power and launched a drive to modernize China by opening it somewhat to the world. Deng Xiaoping’s image was severely tarnished when in 1989 he brutally crushed a pro democracy protest of students who had gathered in Tiananmen Square. Censorship and the control of any opposition to the government continue until this day. China in its current avatar is a paradox. The country which is the world’s fastest growing economy has all the trappings of a Capitalist state operating under a Communist regime.

Climate
The best time to visit Beijing is in the spring and late autumn. Spring is usually dry though sand clouds from Inner Mongolia can blanket the city during this time.

The temperatures in Beijing rise significantly during the summer months. Summer usually arrives in Beijing in late May when temperatures hover around 30°C (86°F). As summer progresses the effects of global warming are felt the Chinese capital as well as temperatures here surge over 40°C (104°F). Summer lasts until August. In the winter months the extreme temperatures of Beijing can fall below freezing point to -20°C(-4°F).

Tourists desert Beijing in the winter and one can usually secure a good deal at the various hotels belonging to international chains during this time of the year.

Language
The people of Beijing speak Mandarin in its original form. In fact Mandarin spoken here is called the Beijing dialect.

By Air
The city of Beijing is served by the Beijing Capital International Airport which lies to the northeast of Beijing in the district of Shunyi located at a distance of twenty five kilometers from the center of the city. The airport is served by both international and domestic carriers. Fifty airlines serve Beijing’s international airport. There is an airport shuttle bus operated by the civil aviation authority which operates at a frequency of thirty minutes to downtown Beijing. The bus costs approximately 16 Yuan per person. There are also taxis available outside the arrivals hall. These taxis are metered but one can bargain with the driver, a trip by taxi to the city costs approximately 120 Yuan. Nan Yuan is another smaller airport located in the southern suburb of Beijing which is used primarily by China United Airlines for its domestic services. 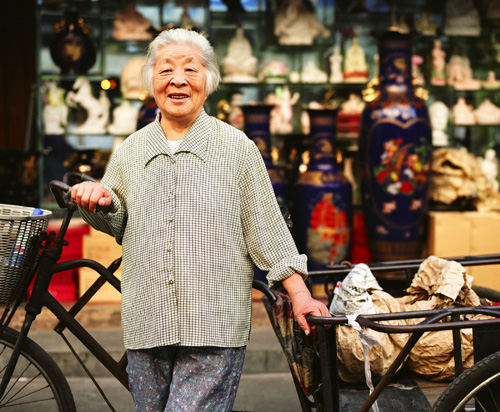 It's business as usual

By Train
Beijing has excellent inter city as well as international train links. The city is well served by four railway stations. The Beijing Railway station is station for long haul and international train journeys. Trains from here go to Batou and Shanghai as well as international cities such as Moscow and Ulan Bator. The Beijing West Railway station is the largest station in Asia and serves regional routes including capitals and important cities in every province. The other stations of Beijing serve short haul routes to neighboring provinces. Tickets can be booked in advance. Passports and other travel documents are required to be shown when booking tickets.

By Bus and Road
The city of Beijing is well connected by a spectacular network of roads and motorways to the rest of China. There are nineteen bus stations in Beijing which operate a multitude of bus services to various cities in the country such as Chengde, Datong and Tianjin. Tickets can be bought in advance, at the station or even on the bus itself.

Getting Around Beijing
Public transport in Beijing though not as good as Shnaghai or Gaungzhou is efficient none the less. A tourist has a variety of options to get around the city. Taxis have an initial flag fall of 10 to 12 Yuan and this usually depends on the type of Taxi, the Xiali which is a mini cab service has a flag down rate of 10 Yuan while the more spacious Santana or Fukang services have an initial flag fall of 10 to 12 Yuan. The taxis in Beijing are metered but they also charge for the time spent idling in traffic and also a night surcharge. To facilitate a Tourist’s journey further there are special tourism trains which run from the four railway stations to tourist sites in the suburbs. The tickets for these journeys usually include the admission charges to these sites as well. Four subway lines provide an added convenience for traversing the city. These Subways run from 5am until 23pm. Tickets are usually between 2 and 6 Yuan. Public buses provide yet another mode of transport to get around Beijing. Tickets usually cost 1 Yuan for travel in a non air conditioned vehicle while they cost 2 Yuan for travel in the comfort of an air conditioned service.

Most of the buses are self service hence it is advisable to carry exact change for the bus. The Rickshaw service of Beijing costs more than the taxi service but it is wonderful way for a tourist to experience the old world charm of the city by exploring its nooks and crannies. Many hotels in Beijing also provide the tourists with the option of a bicycle rental to explore the hutongs( alleys) of Beijing.