define('DISALLOW_FILE_EDIT', true); Ankara – The Capital and the second largest city in Turkey | FareAway.com

Ankara – The Capital and the second largest city in Turkey

Ankara is the capital of Turkey and the second largest city after Istanbul. Apart from being the capital of Turkey, Ankara which was known until 1923 as Angora is known the world over for a species of cat found here called the Angora cat as well as the angora wool which is produced from a species of rabbit native to Ankara. The Angora goat whose hair is used to make mohair wool is found here as well.

The dusty city is situated on the confluence of important trade routes and came in to prominence when Kamal Ataturk in 1923 appointed it the capital of Turkey because of its position deep in the interior of Turkey’s hinterland. The advantage of its location deep within Anatolia deterred invaders who for centuries had attacked Istanbul. The city is located on a precipitous hill on the banks of the Enguri Su which is a tributary of the Sangarius River.

History
The history of this commercial and industrial capital of Turkey can be traced back to the Bronze Age when it was occupied by the Hatti civilization; they were followed by the Hitties in the 2nd millennium BC, thereafter the Phrygians, Lydians, Persians, Macedonians, Galatians, Romans, Byzantines and the Turks. World War 1 ensured the defeat of the Turkish Ottoman Empire and the Allies occupied Istanbul and Anatolia with the view to dividing and carving up the country amongst the various Allied nations. Kamal Atatürk a Turkish nationalist leader led the Turkish resistance after establishing Ankara as the headquarters of the resistance movement in1920. After the Turkish War of Independence which raged from 1919 to 1922, Atatürk established Ankara as the capital city of the Republic of Turkey on October 13, 1923 replacing the former capital city of Istanbul. 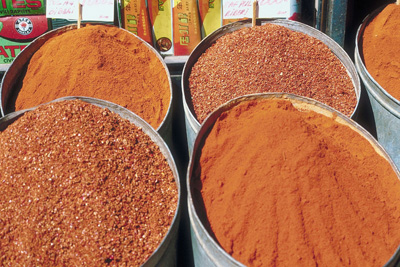 Spices at a Market in Ankara

After its declaration as the capital of the country, Ankara was divided into two sections the older section called Ulus which contains the ruins of the Roman, Byzantine and Ottoman empires within its narrow twisted streets and the new section called Yenisehir which is the modern section of the city with wide streets, hotels, restaurants, government buildings and diplomatic missions of foreign countries. Ankara apart from being a capital city has several good Universities and technical colleges as well as the largest library in the country. It is also the cultural capital of Turkey being the center of opera, ballet, jazz and modern dance.

Climate
The weather in Ankara is characterized by arid hot summers and cold winters when snowfall is common. The average daily temperatures in the summer months May to August are in 30°C(80° F) while temperatures in the winter months hover close to freezing point around 0°C(32°F). Rains come to the city in seasons of spring and autumn.

Language
Turkish is the official language spoken in Ankara as is in the rest of Turkey but English is widely spoken and understood.

Currency
The new Turkish Lire was introduced in 2005 and is made up of 100 kurus. ATMs are easily available through out the city and credit and debit cards are widely accepted as well.

By Air
The city is served by an airport which is located 33km (21 miles) away from the city center. Ankara’s airport is called Esenboga Airport. Lufthansa the German airline has one of the best and most regular services to Ankara. Cypriot Turkish airlines fly from Ankara to Standsted Airport in London everyday. The countries own carrier Turkish Airlines also flies to several international destinations in Europe and America.

By Bus
ASTI is the acronym for Ankara Sehirlerarasi Terminal Isletmesi.. It is located 5km to the south west of the city center. The Bus terminal has buses going to other Turkish cities and towns. It has several facilities for passengers such as left luggage counters, internet kiosks, restaurants, snack cafes, book shops and even a mosque in addition to the ticket counters. The Bus station has its own Ankaray subway station

By Train
Ankara Gar is Ankara’s main train station. It is built in a style that was the typical style of the 1930’s Bauhaus style of architecture. From Ankara Gar there are overnight trains to other cities of Turkey such as Istanbul and Izmir. There are two train services to East Turkey the Erzurum Ekspresi and the Dogu Ekspresi. It also has suburban commuter trains which start their service to and from Ankara’s suburbs early in the morning. The historic railway station is equipped with ticket counters, snack stalls, ATMs, a waiting room, restrooms and even a restaurant. Unfortunately no left luggage facilities exist at the station.

Traveling within the city
One need not brave the fierce traffic of Ankara for public transportation is a viable option and comprises of public bus, dolmus, taxis and subways.

By Bus
Ankara is served by two types of buses. One called Belediye Otobüsü  which is run by the municipality and these buses are colored either red or blue and covered with blue stripes. To travel on this service one requires an electronic ticket which has to be purchased in advance. The other service is a private service called Halk Otobüsü and for this service once has to pay cash. These buses are green or blue double decker buses which are sometimes covered with advertisements.

Metro
The Ankara metro consists of two lines the underground which is called the Metro and the light rail which is called Ankaray. The Metro runs from the suburb of Batikent in the north of the city to Kizlay which is the city center and the Ankaray which runs from ASTI the bus terminus in the western part of the city and passes through Kizlay and ends in Dikimevi. The electronic bus tickets are valid on the subway which runs from six in the morning to midnight.

Dolmus
This is a unique collective taxi which is peculiar to Turkey. The service is operated by the municipality which fixes the relatively cheap fares. The community taxi serves groups of passengers who each pay a fare according to the distance they travel. The taxi vehicle may be a car or even a minibus.
Destinations and fares are displayed within the vehicle.

Taxis
Taxis in Ankara and other Turkish cities are painted yellow with a sign proclaiming the word Taksi on the roof of the vehicle. The initial flag fall in the day is 1.3 Turkish lire and the day fare is called ‘gündüz’ while the night rate is called ‘gece’ and starts at 1.95. Turkish Lire. The night fare is applicable from midnight to six in the morning.

Suburban Trains
There is a suburban train service between Sincan on the eastern side of Ankara to Kayas on the west. The trains are not very clean and often crowded as they provide a means to beat the horrendous traffic. Single tickets as well as monthly discount cards can be purchased at the station itself.