Amman on the Hills

Amman is one of the oldest continuously occupied cities in the world. The capital of Jordan, it is a blend of old and new, with traditional coffee shops nestled among ultra modern buildings and lanes that remind you of the city’s ancient past. It is ideally located on a hilly area between the desert and the fertile Jordan Valley. Amman was originally built on seven hills, or jabals, but it now spans over an area of nineteen hills.

According to a municipal law, all buildings must be faced with local stone, which makes almost all the houses uniformly white. The tree-lined paths with white houses are like a fresh breeze in the summer and pleasant to look at. These white structures seem to glow during sunset. The people are friendly and take pride in their city, and they will be more than happy to show you around this fascinating historical capital.

History:
Amman has been inhabited by several civilizations, the first one on record being during the Neolithic period, around 6500 BC. Archaeological discoveries in eastern Amman revealed evidence of a well-developed civilization. Amman has served as the modern and ancient capital of Jordan. It is one of the oldest continuously inhabited cities in the world and there are many Biblical references to the city.

In the 13th century BC Amman was called Rabbath Ammon or Rabat Amon by the Ammonites. It was later conquered by the Assyrians, followed by the Persians, and then the Greeks. Ptolemy II Philadelphus of Egypt renamed it Philadelphia after himself. The city came under Roman control in 106 AD and became part of the Decapolis—an alliance of ten free city-states, including Jerash, Gadara, Pella, and Arbila, bound by commercial, political, and cultural interests under overall allegiance to Rome. Under Roman rule, Philadelphia was reconstructed in the grand Roman style with colonnaded streets, baths, an amphitheater and impressive public buildings.

During the Byzantine period, in 324 AD, Philadelphia was the seat of a Christian bishop, and several expansive churches were built. One of the churches of this period can be seen on the city’s Citadel. The city was overrun by the Persian Sassanians in 614 AD but shortly after, in 635, the Arabian armies of Islam took over and the name of the city was changed to its Semitic origin of Ammon, or ‘Amman’.

The city flourished under the Caliphates. It was then destroyed by several earthquakes and natural disasters and remained a small village and a pile of ruins until the late 19th century when the Ottomans resettled a colony of Circassian emigrants there. The Ottoman Sultan decided to build the Hejaz railway, linking Damascus and Medina, facilitating the annual haj pilgrimage and permanent trade.

In 1921, after the Great Arab Revolt secured the state of the Emirate of Transjordan, Emir Abdullah bin al-Hussein made Amman his capital. It later became the capital of the Hashemite Kingdom of Jordan. As there were no palaces, he started his reign from the station, with his office in a train car. Amman remained a small city until 1948, when the population expanded considerably due to an influx of Palestinian refugees as a result of them leaving the newly-created state of Israel.

The city gets a great influx of refugees, straining its resources. The first wave of Palestinian refugees arrived from West Bank and Gaza as well as Israel in 1948, then after the Six Day War in 1967, and the Gulf War of 1991. The city is growing fast to accommodate everyone.

Sights:
Much of Amman’s tourism is focused in the older downtown area locally as the Balad. For those wanting to step back in time and experience life in the old city, it is best to venture to the district east of Jabal Amman where you can explore souqs (markets), museums, ancient constructions, monuments, and cultural sites. 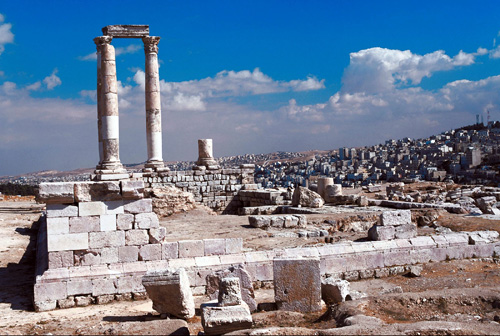 The Citadel hill of Amman, known as Jabal el Qala, has been inhabited for centuries, and has been an important military and religious site. Towering above downtown Amman, the site of the ancient capital Rabbath-Ammon, and numerous excavations have revealed remains from the Middle Bronze Age and the Iron Age, as well as from Hellenistic and late Roman to Arab Islamic Ages. The site contains several structures—the impressive Omayyad Palace (al-Qasr), a small Byzantine basilica and what was once the Temple of Hercules, the Great Temple of Amman. Also on the site is the Jordan Archaeological Museum.

The remains of a small Byzantine Basilica are marked by Corinthian columns, which are thought to date from the 6th or 7th century AD. Nearby is what is thought to have been the Temple of Hercules, today also known as the Great Temple of Amman. The temple is said to have been constructed under the Roman emperor Marcus Aurelius (161-180 AD).

The most impressive building here is the Al-Qaser (the Palace), which dates back to the Islamic Umayyad period around 720 AD. It is not known what the exact purpose of the palace was. The building includes a monumental gateway, cruciform audience hall and four vaulted chambers. A colonnaded street runs through the complex and you can also find the ruins of the Umayyad palace grounds.

The Jordanian Archaeological Museum is conveniently located around three sites. This small museum houses an excellent collection of antiquities ranging from prehistoric times to the 15th century.

The more popular exhibits include the Dead Sea Scrolls found in 1952; the Neolithic limestone statues of Ain Ghazal, which are linked to advances in pro-technology; a copy of the Mesha Stele or Moabite Stone, erected by the Moabite King Mesha in 850 BC to celebrate his numerous victories over the Israelites; and four rare Iron-Age anthropomorphic sarcophagi, which give an insight into ancient burial practices.

The Roman amphitheatre is thought to have been built between 138 and 161 AD during the reign of the Roman Emperor Antoninus Pius. It was constructed into the side of the mountain that was once used as a necropolis (graveyard) and is still used for sport displays and cultural events today. The design is similar to the amphitheater at Jerash, and its 33 rows could accommodate over 6000 spectators.

To its northeast stands a smaller theater, Odeon, built at about the same time. This 500-seat theater was, and still is used for musical concerts. The structure may have been originally covered with a wooden or temporary tent roof to shield performers and audiences.

Philadelphia’s chief fountain, Nymphaeum, dedicated to the water nymphs, stands nearby. It was completed in 191 AD and is said to have contained a three meters deep 600 sq m pool continuously refilled with fresh water.

The Jordan Museum of Popular Tradition is also situated near the Roman theater and has on display traditional costumes, beautiful antique jewelry, and domestic utensils. It also houses a collection of mosaics from Madaba and other Byzantine churches in Jordan dating as far back as the 4th to 6th century. The nearby Jordan Folklore Museum showcases traditional Jordanian life, including costumes, home furnishings, musical instruments and handicrafts dating back to the 19th century.

Amman has some of the grandest mosques in the region. The enormous King Abdullah I Mosque, built between 1982 and 1989 is quite new. Capped by a magnificent blue mosaic dome, it was built as a memorial to the late King Hussein’s grandfather. Over 3,000 Muslims can pray here together. Women are asked to wear an abaya (gown) and cover their hair. The Islamic Museum inside the mosque has a collection of pottery and photographs of His Majesty King Abdullah I. 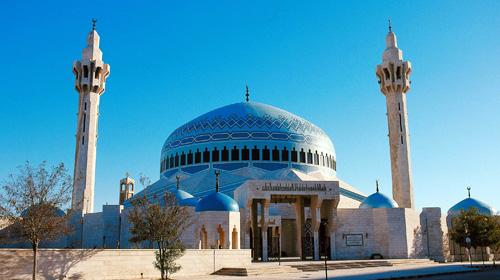 The Abu Darweesh Mosque atop Jabal Ashrafieh is located on the highest point in the city. It is covered with a black and white chequered pattern and the striking pattern is visible from quite some distance. It was built by one of Amman’s Circassian immigrants.

A short stroll through the busy streets of t downtown Amman will bring you to the Grand Husseini Mosque. Originally there used to be am ancient mosque here built originally in 640 AD by Omar ibn Al-Khattab, the 2nd Caliph of Islam. This Ottoman style mosque was rebuilt using striking pink-and-white stone in 1924 by the late King Abdullah I. it is said that this might also be the site of the Cathedral of Philadelphia. Nearby you will also find Amman’s famous gold souq, which lures you in with its rows of glittering gold.

Take a walk down the meandering, vibrant streets to absorb the local flavor and customs. You will find many shops where you can purchase exotic treasures and souvenirs, everything from fruits, perfumes, gold and other trinkets. Stop at a maqha (cafe) for some coffee and a quick game of backgammon or have some traditional Arab sweets and mezzah (appetizers) while you take in all the activity that surrounds you.