Probably the most populated urban area in the world, people who come to Tokyo for the Oriental experience get a rude awakening. One of the most modern and technologically advanced cities in the world, Tokyo has very little traces left of its traditional past, although one can still find such places if you know where to look.

The first thing anyone entering the city is bound to notice is the immense mass of people. 10 percent of Japan’s entire population lives in Tokyo—that’s over 12 million people residing in just 2100 sq km area of space. There is just about 4.5 sq m of space available per capita as compared to 45.7 sq m available per capita in Washington, D.C! Land is far more valuable than gold in this part of the world and to combat that situation high rises are cropping up at every inch available.

Despite the sheer number of people struggling to find a space for themselves in the city, it is an overall harmonious and safe place to live. It has been in the forefront of technology and innovation…the Japanese have improvised and improved everything from kitchen appliances to computers, cars and audiovisual equipment.

History
Before 1868, Tokyo was a small obscure town known as Edo, meaning ‘the mouth of the estuary’, and Kyoto served as the Japanese capital. With the Meiji Restoration, this town was made the capital and renamed Tokyo, or the ‘eastern capital’. The credit for this goes mostly to Tokugawa Ieyasu and Emperor Meiji who made Edo their base, making it the political, economic and imperial capital of the country.

From then on a parliament, called the Diet, was elected, a prime minister and cabinet were appointed, a constitution was drafted and many advisors from Western nations were appointed to help transform the country into a modern society with an effective railway and postal system. From here onwards started Tokyo’s craze for modernization—fashion, food, architecture, the way of life, everything was imitated from the West.

In the first half of the 20th century itself, the city was almost destroyed twice. The first calamity struck in 1923 when an earthquake measuring 7.9 on the Richter Scale hit the city followed by a tsunami. It was known as the Great Kanto earthquake disaster killing thousands and leaving the city in ruins. The second event that left a mark on the city was the second world war that killed countless residents and almost destroyed the city again.

But like the phoenix, the city emerged from the ashes of defeat. They started their efforts to rebuild the city and its economy. A new democratic constitution was adopted and a parliamentary system of government was set up. In 1947 he first general elections were held. The city in its current avatar is a testimony to the sincerity and dedication of its people to progress and develop leaving behind them a dark past.

Getting there and around

Tokyo is a place for all seasons, although most foreign tourists visit it during summer time. Japan has four distinct seasons and the people here place much emphasis on them. Attire, utensils, etc all change according to the seasons and most festivals are related to seasonal rites.During Japanese holidays like the Golden week that falls between the months of April and May, and summer vacation in July through August, Tokyo is relatively empty as most of the urban population go for vacations outside the city. However, in February, high school students from all over the country converge in Tokyo to compete in entrance exams for the city’s top universities so hotel rooms are mostly booked. Also, if you are planning to visit the city around the new year, be prepared to find almost the whole city on a holiday and enjoying the festivities. Most museums and restaurants also remain closed during this period. 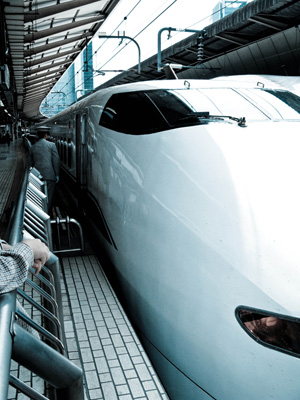 Narita International Airport and Haneda Airport are the international and domestic airports respectively that service Tokyo. Narita is about 66 km outside Tokyo and the stretch in between is far removed from the urban madness of the city, with bamboo groves, pine forests and paddy fields.

Americans, Australians, Canadians, New Zealanders, British and Irish citizens traveling to Tokyo need only a valid passport to gain entry depending on their length of stay. Other nationals require a visa. Foreigners are required to carry with them their passport at all times.

It is said that in Japan, all roads, rails, shipping and air routes lead to Tokyo, such is the importance of the city. The main mode of commuting for most Tokyo residents is the railway system, both, subways and surface lines. Given the overcrowded streets, this is the most economical and fastest way to travel. It is one of the most extensive and efficient urban railway systems in the world. Shinjuku station, with over 60 exits leading out of the station, handles the most train and subway passengers—over a million people a day.

Other ways of commuting are the public and private buses with stops at major railway terminals for local, regional and national travel. Expressways link the capital to other parts of the region. Taxis are available in the city but due to its high cost and the congestion on the roads, it is not the best means of travel. Ferries carry passengers and cargo to the islands nearby.

Given the traffic conditions, Tokyo’s working population spend on an average 180 minutes commuting to and from their workplace. But they would all agree that there is no where else in the world they would rather live or work.