Many folk turn their noses up at a mention of Singapore as an ‘interesting and fun’ tourist destination. However, no less than 9.7 million tourists visited Singapore in 2006 so the city state must be doing something right for it to be on the radar of so many visitors.

Located in South East Asia this lush and vibrant island is one of the most affluent countries in the world and is a unique blend of modern technology and eastern customs and traditions. Many foreigners who are posted to Singapore, the location of many a company’s Asian Headquarters don’t usually want to go home as they get accustomed to the excellent standard of living Singapore has to offer. It is world famous for its ‘cleanliness’ and the strict imposition of fines if the rules of cleanliness are not observed.

For this Singapore is often termed ‘the fine city’. One can purchase t-shirts from the souvenir stores which poke fun at the various fines which are imposed on the general public. Singapore today however is trying hard to shake off this stodgy image.

The credit of bringing Singapore into prominence is given to Sir Stamford Raffles a British civil servant who acquired Singapore from the Sultan of Johor. It continued to remain an important British naval base until the Second World War when it fell to the Japanese who imposed a crushing defeat on the British forces stationed in Singapore. After the war it retained its earlier status in the colonial empire until the colonial rule ended in 1959. In 1963 it joined the federation of Malaysia but it seceded from the federation in 1965. It continues to share a love hate relationship with Malaysia as there exists a rivalry between the island city and its bigger neighbor periodic disputes over water and air space are common occurrences. However this rivalry has also acted as an impetus for the Malaysians to improve their cities a la mode Singapore say most proud Singaporeans. Most Singaporeans are fiercely nationalistic and proud of their ‘Lion City’

called so because of an ancient legend which says that an early explorer who landed here discovered a strange beast inhabited the island called the Mer Lion and he called the island Singapura which in Sanskrit means lion. This creature with a lions head and a fish’s tale is immortalized in a statue of Singapore’s Harbor and is often the symbol of Singapore.

Much of Singapore’s modern day affluence and prominence in the world economy can be attributed to its Premier Lee Kuan Yew. Lee Kuan Yew was first elected prime minister in 1959 and reelected many times after, he was instrumental in shaping the economy of the city state which had only a good harbor and not many natural resources. Through an incentive based system he motivated the people of Singapore to build an export driven and service based economy. This continues till today as Lee Kuan Yews son continues the vision of his father Lee Hsien Loong is the head of the Peoples Action Party and the Prime Minister of Singapore. Singapore is a multi cultural society though the majority of the population is Chinese; Malays and Indians also make up a significant part of the ethnic fabric of this nation.

Language
English is one of the official languages along with Mandarin, Tamil and Malay.

Climate
Located in the tropics Singapore enjoys warm and sultry weather all year round with copious amounts of rainfall. This year the rainfall has been unusually heavy may it is a fall out of the global warming. Due to this rainfall, Singapore is verdant all year round with lush tropical vegetation and magnificent Bougainvillea and Orchid blooms flowering all year round. The Orchid is the national flower of this Lion City.

time to visit Singapore is from November to February when the temperatures are slightly milder and the heat is not oppressive. Moreover in the month of December the main shopping drag that is Orchard Road is dressed for Christmas and just as Oxford Street in London it is a spectacle worth seeing. 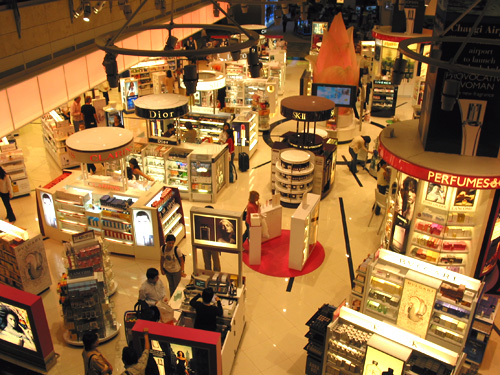 Travelers year after year vote Singapore’s ultra modern Changi International airport the “Best in the world”. Similarly Singapore’s national carrier Singapore Airlines represented by its Singapore Girl and its slogan “what a great way to fly” continue to win accolades yearly for its outstanding levels of service. Changi International Airport plays host to a number of airlines apart from the home grown carrier and is composed of three terminals. One for the many international carries that call at the airport and the other for Singapore Airlines and its Star Alliance partner airlines and the regional subsidiary of Singapore Airlines- Silk Air. A third budget terminal handles Tiger and Cebu Pacific airlines. Changi airport has numerous amenities such as reasonable transit hotels, restaurants and stores teeming with duty free goods as well as a movie theater and a swimming pool. Killing time at Changi during a lay over is never a problem.

Getting into the City from the Airport
Hailing a Taxi cab at the airport is very easy and most rides into the city cost between S$20-S$30 with a surcharge for the airport trip. Limousines are also available for a higher price of S$35. There are also Maxi Cabs which can take one into the city and are better for larger families. The Singapore Subway called the MRT comes into Terminal 2 and is another option if one doesn’t have much luggage. Buses also run regularly from the Airport to the City Center.

By Road
Singapore is connected by two expressways to Malaysia. Causeway is the older one in the northern part of Singapore. It is busy and congested and used by private as well as public transport . The second Expressway is at Tuas in western Singapore it is less busy as it is used by private transport and many of the luxury Bus services that exist between Singapore and Kuala Lumpur. These Bus services have their pick up points all over the Island at various hotels and at an area called Lavender.

By Boat
Singapore has three ferry terminals at the Harbor front, Tanah Merah on the East Coast and the Changi Ferry Terminal. The Habor Front terminal handles the popular Star cruise liners which cruise to Thailand and other neighboring countries. Ferries also go to the nearby Kusu Island famous for its turtles and an important locale for the Taoist religion.

Getting Around Singapore
EZ Link Pass for Bus and MRT travel
Singapore boasts of a highly efficient and organized public transport system which makes getting around the Island extremely easy. Moreover the buses and subway are all air-conditioned so the sultry weather is also kept at bay as one travels in comfort. An EZ link fare card is available for use on both the buses as well as the Singapore subway system called MRT. These fare cards are available for an initial charge of S$15 which includes the S$5 non refundable amount of the card itself so an initial outlay of S$15 gives one a travel credit of $10. When using the card in the Bus one must remember to tap the reader at the entrance as well as one gets off to avoid paying the maximum amount of fare on that route which is charged if one does not do so. The MRT is an efficient way to travel around the island, eating and drinking are not allowed in its clean environs nor also carrying the Durian fruit which is widely eaten on the island but which emits an awful stench.

Taxis
Taxis are plentiful and easily available in front of the gargantuan Shopping centers of Orchard Road. Taxis can also be booked for an additional fee. There are three taxi companies in Singapore Citycab, Comfort and SMRT. However after midnight until 6 am taxis have a 50% surcharge. They also have peak hour surcharges from 7.30am to 9.30am on week days and 4.30 pm to 7pm from Monday to Saturdays.

Trolley
A sightseeing trolley gaily painted called the Singapore Explorer rumbles down Orchard Road towards Marina Square and along the Singapore River. Daily tickets can be bought for unlimited rides through out the day. Singapore Airlines also operates a hop on bus whose tickets are available at a discount for the travelers of SIA. The tickets to both the trolley and the hop on SIA bus can be bought from most front desks of hotels as well as the Singapore Airlines office at the Paragon Shopping Center on Orchard Road.