Osaka – Once the Capital of Japan

Osaka, the second city of Japan after Tokyo, is said to be the country’s best place to eat, drink and be merry! It was earlier called Naniwa and has also had the honor of being the capital of Japan at one point. But even after the capital shifted, Osaka has continued to be an important hub for land, sea and river transportation. It has also served as the ‘nation’s kitchen’, being the collection and distribution point for rice, the most important measure of wealth in olden times. Now that’s a title few cities can boast of having!

The older generation in Osaka would probably remember the city as a maze of waterways that was the principal mode of transportation for the booming merchant trade in the city. Almost all the canals and the traditional wooden buildings were destroyed during the World War II. Now the city has a more modern and futuristic feel to it with buildings such as the inverted U-shaped Umeda Sky Building, Imperial Hotel, and the Ferris wheel on top of the HEP Five Complex. The city is also trying to establish green areas in the city in an attempt to regain some of its lost beauty.

Many districts in the city derive their names from the bridges built here in the Tokugawa era, when it was a major transport hub for the country. In fact it was given the adage of ‘the 808 bridges of Naniwa’, an expression of awe and wonder (Naniwa was the city’s name, and 808 symbolises the concept of uncountable).

The city is still very much a commercial and merchant city as it has always been, with many streets still devoted to wholesale commerce – Dosho-machi for medical supplies, Matcha-machi-suji for fireworks, and Namba for department stores.

During the time that the city was expanding as a trading center by the end of the 16th century, the merchant class was considered at the bottom of the social hierarchy, even though they were among the richest people around. Denied access to aristocratic activities, the merchants sought pleasure in theatre and dining. In fact, it is often remarked that many a successful businessman in Osaka has gone bankrupt by spending too much on food! The tradition to enjoy life still continues. The city’s night life is well-known. The Dotombori-dori area has more nightclubs and bars per square foot than any other part of town!

Location
At the mouth of the Yodo River on Osaka bay is the city of Osaka, the third largest city of Japan. It lies in the Kansai region of the Honshu Island. Apart from the west side which is open to the bay, the city is surrounded by ten smaller cities.

History
Osaka had been, since the beginning, the knowledge and cultural hub of Japan, filtering it from mainland Asia. In the 4th and 5th centuries, the Osaka-Nara region was the center of development in the country. In the next two centuries that followed, many emperors maintained an imperial court in Osaka. In 645, emperor Kotoku built his palace here, Naniwanomiya Palace, the city’s oldest palace, named after what Osaka was called then – Naniwa. Then in 655, the capital was moved to Asuka, but in 744, Naniwa was once again declared capital by emperor Shomu. But the city lost its political importance when Nara was set up as a capital in 694. Naniwa, however, was already on its way to becoming a hub port connecting the region to the western part of Japan and to Korea.

In 1496, the Jodo Shinshu Buddhist sect set up their base here in the heavily fortified Ishiyama Hongan-ji on the ruins of the old Naniwa imperial palace. Almost a hundred years later, a warlord named Oda Nobunaga started a siege of the temple that lasted for ten years. Once the monks surrendered, the temple was demolished and later on his successor Toyotomi Hideyoshi built his castle in its stead, the Osaka Castle, which still stands.

Till now, the city was just another backwater port on the Seto Inland Sea, but Hideyoshi encouraged merchants from all over the country to set up their businesses here, and Naniwa soon flourished. In the years that followed Hideyoshi’s death, many clans reigned over the now prosperous city. During this time, many of Japan’s business dynasties were founded, many of which like Sumitomo, Sanwa and Daiwa, still exist today.

After 1601, the political capital was moved to Edo, present day Tokyo. Osaka’s economic affluence gave rise to culture and arts. The city was also instrumental in developing the education system of the country. After the Meiji Restoration in 1868, social and economic reforms contributed to a decline in Osaka’s prosperity. The city transformed from a trade base to a commercial center, and the smoke emitting from the factories made people name it the ‘smoky city’. It was also compared to Manchester in the United Kingdom.

Osaka was officially incorporated as a city in 1889 with a mere 15 sq km to start with. After three major expansions, the city grew to its current area of 222 sq km. By 1925, Osaka was the sixth largest city in the world.

Continuous air raids during World War II destroyed most of the city but after the war was over its citizens gradually restored the city’s economic and commercial prowess, and helped make Osaka the economic heart of Japan.

Climate
Summers in Osaka are hot and humid, and winters, though it rarely snows here, it does get quite cold. The best time to visit the city, however, is April-May when the cherry blossoms blossom, and during October-November, autumn when the leaves change color. These periods offer mild temperatures, not much rains and pleasant weather.

Getting there and around 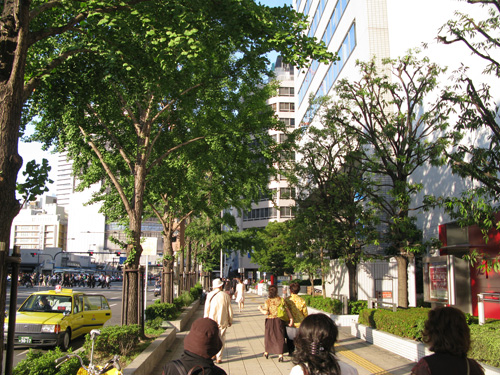 Osaka is also accessible by bus and trains if you are arriving from other parts of the country. There are also ferries to and from Bussan in South Korea and Shanghai in China, from the Osaka International Ferry Terminal.

Within the city, the subway is a convenient way to travel. It has the second most extensive subway network after Tokyo. However, the Osaka subway turns out to be more expensive, especially for commuting over shorter distances.

Trains are also a good way to commute and the JR Osaka Loop Line runs in a loop around the city, making it convenient.