The capital of Oman is not a city itself rather is is a group of cities and towns which make up the ‘Municipality of Muscat’ or the ‘Capital Area.’  These towns and cities border the Gulf of Oman.  Muscat is one of the oldest cities in the Middle East and it has been historically associated with the trade of frankincense and myrrh.  The actual epicenter was an area the Greeks used to call ‘Khouri Rouri’ and it lies 500 miles south of Muscat near the city of Salalah.

The Portuguese captured Muscat after the famous explorer Vasco de Gama arrived here en route to India. In the fourteenth and fifteenth centuries it functioned as a Portuguese naval base and they built the forts of Jelali and Merani. These medieval forts coexist with the bustling and modern structures of Muscat today and stand witness to its historical past. After the Portuguese the Persians tried to establish their rule in Oman as did the Wahabis of Saudi Arabia. Even the communists tried to grab it in the late twentieth century but the attempt was repulsed by the Omani, British and Iranian forces. Prince Qaboos bin Said established the modern Sultanate of Oman by way of a coup in 1973 . Its long and often violent history as well as its importance as a center of trade ensured that Muscat developed with Portuguese, Persian and Indian influences.

Getting to Muscat
Seeb International airport is the gateway to Muscat. It is located 25 Km from the residential sectors of Muscat and is one of the three headquarter of the Gulf Airways airline. Gulf Air flies to other areas in the Middle east as well as on routes in Europe and the Indian subcontinent. Many other airlines come into Seeb International Airport from India and other countries in Europe and Asia.

Climate
Located in the Middle east it has a hot summer from March to October when the temperature ranges from 31C( F) to 40 C( F) . The winter months are milder and due to its location near the sea humid too where temperatures range from 15C(F) to 23C(F)

The best time to visit the sultanate is in January when it stages a cultural and sporting festival with the camel races being organized all through out Oman..

Languages
Though Arabic is the main language, English is widely spoken. Persian, Swahili and languages of the Indian Subcontinent Hindi and Malayalam are other prominent languages of the governorate. Once again, this highlights its role in global trade over the years as well as the various historical influences which have helped shape modern Muscat.

The People
The people of Muscat are largely native Omanis but it like other states in the Gulf it has a considerable expatriate population made up of people from other parts of the Middle East as well as folk from India, Pakistan and Bangladesh . Apart from the majority of the populace being Ibadi Muslims, Hindus and Christians are also present and are allowed to practice their faith. Muscat has two temples dedicated to the Hindu deities Shiva and Krishna. In the city of Ruwi which is part of the municipality there exist two Churches to cater to the spiritual beliefs of the Christian.

Getting Around
Muscat like other modernized Gulf cities is well served by roads and highways though development of public transportation has not been a priority in this oil producing nation. The Oil Industry is the largest employer in Oman.

Buses called “Baiza” buses ply on the major roadways between the cities of Oman and within Muscat as well. These buses do not have predetermined stops and pick and drop passengers at their whim. They are relatively inexpensive. There are also the red and green public buses in Muscat. These are more expensive and ply on specific routes between Muscat and other cities.

Taxis, unlike in other cities in the Middle East where the taxi drivers come from the Indian subcontinent here they are exclusively the domain of the Omani drivers. The Taxis are white and orange colored and do not follow a meter. It is always wise to ask your host or the hotel for the approximate fare to your destination before hailing a taxi. Haggling for the correct fare is the norm in Muscat. These Taxis are happy to take a tourist outside the city environs even as far as Dubai. 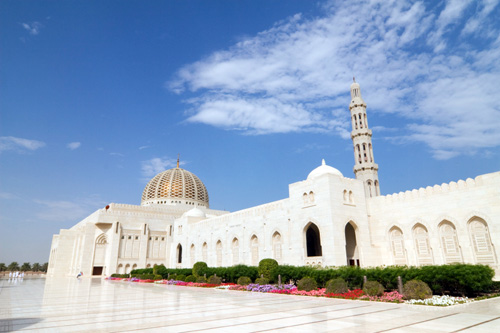 Rental Car agencies such as Hertz Rent-a-car and Avis as well as local rental agencies provide services in Muscat.

To Stay
The Al Bustan Palace hotel forms a part of the Intercontinental group and this magnificent structure is well known all through out the region .However the hotel is undergoing extensive renovations until December 2007.Other prominent hotels are the Muscat Intercontinental, the Grand Hyatt and the Sheraton Oman at Ruwi the commercial hub.