Lisbon, or Lisboa, is the capital and the largest city of Portugal. It is also the westernmost capital in mainland Europe. With an area of only 85 sq km, it is proof that the size of a country doesn’t matter…it’s what you do with it. High economic output, standard of living, and market size makes the city one of the major financial and economic centers of the Iberian Peninsula. It is also the political center of the country.

It is located on the coast of the Atlantic Ocean at the point where the river Tagus flows into the Atlantic Ocean. The western part of the city is mostly taken up by the Monsanto Forest Park, one of the largest urban parks in Europe. Lisbon’s location on seven hills beside a river was a great incentive for traders and settlers once upon a time, and even now it’s still a stunning site. At the heart of the city you can see wide, tree-lined avenues embellished by Art Nouveau buildings, mosaic pavements and street cafes on either side.

Lisbon is a legendary city with over 20 centuries of history and also the stage for popular festivities, shopping, exciting nightlife, and interesting museums.

Historical background
According to some excavated archeological ruins found in the area, Lisbon’s history dates back to over three million years ago. However it was only in the 12th century that it emerged as a nation state making it one of the world’s longest founded cities. According to legend, the city was founded and named by Ulysses as Ulissipo, which in Phoenician would translate to ‘Allis Ubbo’, meaning ‘enchanting port’.

Lisbon, in its early days, was a battlefield for the Phoenicians, Greeks and the Carthaginians till the Romans took over in 2205 BC and ruled the land for the next two centuries. During this time, Lisbon was called Felicitas Julia and was one of the most prominent cities in the Iberian Peninsula.

The 15th century was the period of immense development and prosperity for the Portuguese due to the many new sea routes that were discovered and the off shore colonies that were gained by them in the Atlantic islands, the shores of Africa, the Americas and Asia. Vasco da Gama’s discovery of the sea route to India was of marked importance. Lisbon became one of the world’s most thriving trading centers, and its wealth and fame grew. 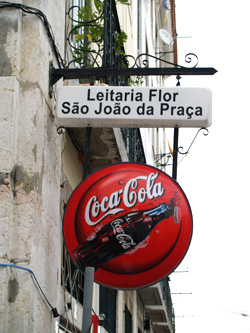 However, this booming era didn’t last long—the earthquake of 1755 destroyed almost the entire city. The city had to be rebuilt and this task was taken up by the Marquis de Pombal, who created the Baixa Pombalina, a commercial area that still is a major tourist attraction, among many others. In the following years, the city sprang back to its feet and continued to spread.

Visiting the city today, you will find many contrasts where the past still mingles in harmony with the present and the future, and the city offers so much to discover as one of the most beautiful capitals of Europe.

Sights around town
The Calouste Gulbenkian Museum
The museum was created from the personal collection of Calouste Gulbenkian, an Armenian who wanted to display his treasures and share them with everyone. The collection consists of over 6000 pieces of a wide range of objects, works of art and curios including Egyptian artifacts, along with exquisite paintings by world renowned artists such as Rembrandt, Manet, Monet, Renoir, and Cassat. The museum’s gardens are also worth a visit. The lush green, immaculately manicured lawns are an oasis in the middle of downtown Lisbon.

National Museum of Ancient Art (Museu Nacional de Arte Antiga)
Also known as Janelas Verdes Museum, it is located near Santos o Velho, and has a wonderful view over the Tagus River. It was constructed in 1884 and its collection includes European paintings, sculpture, jewelry, furniture, ceramics, textiles and other decorative arts representing the artistic forms from the Middle-Ages to the 20th century. The museum also holds ornamental objects made in Africa, India, China and Japan.

Saint George’s Castle
It is ideally located on top a hill, but apart from the attraction of the splendid castle, the place also awards the visitor with a magnificent view over the city and the river meandering through it. The citadel was once used as a fortress and today is home to many local families. Here you can see geese and ducks roaming around the castle gardens.

If you have the time and the strength to walk up here from downtown, you could stop for a while at the quaint old neighborhood of Alfama, and get a taste of life as it has been for centuries here with the architecture, the sounds and the smells of old Lisbon.

Santa Justa’s elevator
You might think an elevator ride is not much of an attraction but it is an engineering marvel in itself and definitely worth a look. The 45m high elevator is made entirely of cast iron, and embellished with filigree, and connects the downtown area, Baxia, to Bairro Alto. When it was opened in 1902, it was powered by steam and became electrical in 1907. It was at the time the only vertical elevator in Lisbon in public service.

Praca do Comercio
The Commerce Square, facing the river, is the beginning of Lisboa’s downtown and is also known as ‘Terreiro do Paço’, meaning ‘Garden of the Palace’ in reference to the palace that was here for over 400 years, until the 1755 earthquake that destroyed it. It was once the main maritime entrance to Lisbon and you can still see the old marble steps leading up to Commerce Square from the River Tagus. Here you will also find the impressive 19th-century triumphal arch that leads to Rua Augusta, one of the main pedestrian shopping areas in downtown Lisbon. The arch is decorated with statues of historical personalities, like Vasco da Gama and Marquis do Pombal.

Belem
This neighborhood is packed with monuments such as the Belem Tower (Torre de Belem), the Jeronimos Monastery, Padrao dos Descobrimentos and the modern Belem Cultural Center. Take a leisurely stroll around its many gardens or along the river, and don’t forget to pack a few boxes of the areas’ famous tarts.

The Belem Palace is also situated here but is restricted for visitors as it is being used as the President’s residence. Visit the Coach Museum (Museu dos Coches) housed in the former riding school of the palace, which now holds the world’s largest collection of coaches and royal vehicles. The Belem Tower was built in tribute to the patron saint of the city, Saint Vicente. The fortress has also been used as a customs control point, a telegraph station, a lighthouse and also as a political prison. In 1983 UNESCO classified it as a World Heritage Site.

The Belem Cultural Center offers four exhibition areas and a Design Museum. On display are plastic arts, architecture, design and photography, showing the evolution of the concept of design through the 20th century.

The Jeronimos Monastery, dedicated to the Belem Virgin, is the jewel of the Manueline style, an exclusive Portuguese style that combines architectural elements from the Gothic and Renaissance periods. The work was initiated in 1501 by King D. Manuel I and took almost a century to complete. D. Manuel I and his descendants were buried in marble tombs located in the chancel of the church. As it was built on the sand banks of the river Tagus, the great earthquake of 1755 had little effect on the structure. In 1907 it was declared a National Monument and in 1984 it was classified as the Cultural Heritage of all Humanity by UNESCO.