Kathmandu – The Ancient Capital of Nepal

Kathmandu, the capital of Nepal is a land of ancient temples and tranquil temple squares, dilapidated mansions and crowded alleyways, exotic bazaars and serene monasteries, a potpourri of fascinating colors and delectable cuisine and breathtaking scenery be it the awe inspiring Pashupati temple or the majestic mountain peaks. The boisterous city of Kathmandu is buzzing with life. The vibrant culture, rich history and stunning scenic splendor make traveling around the world to experience something new, well worth it.

The main charm of old Kathmandu lies in leisurely covering the city on foot and randomly exploring the many mazes of narrow winding streets, lanes and courtyards that surround the city. It is while you aimlessly wander around this quaint city with its many cell like shops selling exotic silver jewelry, hand painted paper Mache products, titora-a sweet and spicy candy and other incredible products that you will discover the real Kathmandu. Houses exquisitely decorated with intricate carving, age old windows and balconies painstakingly carved in wood and stone, hundreds of beautifully adorned temples and sacred ponds of water surround the city. The city feels like a perfectly preserved medieval town with cobbled streets, goats wandering about and little wrinkled women sitting in the sun, much like Rome with an Asian influence. All of the doors are so tiny that it seems the town was built for children. It can all feel like one big fantasy at times. Kathmandu can make you feel like Alice in Wonderland.

The stunning architecture which is a combination of stone work and intricately carved woodwork carries onto the three main squares which are connected by one main winding road. The squares or durbars are surrounded by magnificent temples and time worn storefronts. You could sit in these squares for hours sipping hot tea and simply watch life pass by.

The Main Square or durbar is the traditional heart of the old town and a stunning legacy of traditional architecture. It was also the seat of the throne long ago so the temples and buildings are a pleasure to study, most dating back to the 17th or 18th centuries. 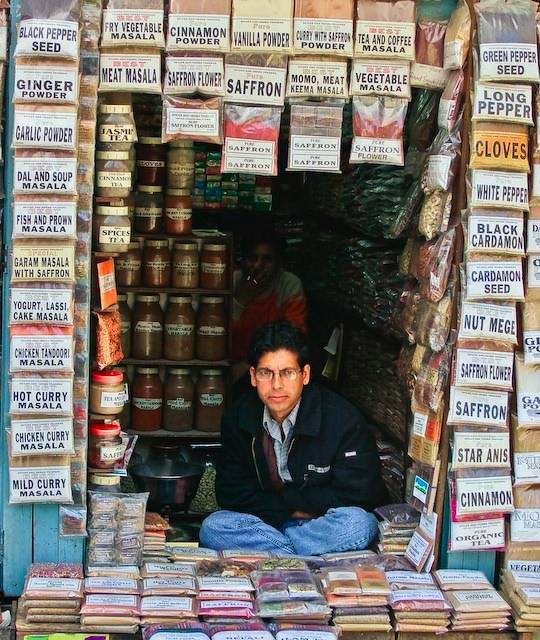 Durbar is alive with the energy of hundreds of people praying, youngsters lounging on the ancient staircases, and adorably dressed children running around playing games. Every turn opens to ancient temples, shrines and splendid architecture. It also compromises of the mansion of the living virgin goddess, a young Nepali girl who is worshipped like a goddess till she reaches puberty. During the night it becomes a market with vegetable sellers displaying their ware around the bases of the multi-story temples and vendors selling popped corn, beans and momos. It’s the perfect spot to sit and people watch. It is also supposed to be a World Heritage site

Hanuman Dhoka or The old royal palace is a part of Durbar Square; it once housed the king who no longer lives here. The palace was damaged during the 1934 earthquake, but is still an interesting place to explore. The western wing of the palace has been converted into a museum portrait type photographs and newspaper clippings and opulent furniture that celebrate the long history of Nepal’s monarchy.

No trip to Kathmandu is complete without a visit to Freak Street, Katmandu’s famed street from the 1960s when it was a haven for hippies. Originally called Jochne it has been better known as Freak Street since the early ’70s. It was once a quaint establishment with temple bells ringing in the background, sweet scented incense, brightly colored flowers against the murky mud and smelt of wood burning stoves and the refreshing fragrance of mountain lemons….all lapped up by the enlightenment seeking wanderers. 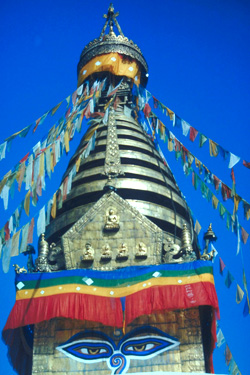 The visually stimulating temple which is colorfully decorated with prayer flags, brightly painted Buddha statues and Nepalese scripts carved on rocks is also home to many monkeys and Buddhist monks. The first thing you notice about the Swayambhonath Stupa is the massive quantity of colorful prayer flags swaying above you in the breeze. The stupa itself is serene yet chaotic with monkeys darting in front of you, pigeons flying overhead, the prayer flags blowing in the wind, the sounds of bells chiming from the stupa as dogs, visitors and monks wind their way through the compound. The energy and sounds of this complex is concentrated at its heart-the stupa itself. People pray, light candles and spin the prayer wheels. There are many shops selling Tibetan handicrafts and prayer material surrounding the stupa.

The magnificent Pashupatinath temple, dedicated to Lord Siva is located at the edges of the Bagmati River. It is one of the most sacred temples of the Hindus and also a destination for the annual pilgrimage on Shivratri, a Hindu festival observed to celebrate Lord Shiva’s marriage with Parvati. Being a staunch Hindu temple, only the Hindus are allowed to enter the temple. Foreigners can watch the funeral processions from the other side of the Bagmati River. Witnessing the funeral pyres on the cremation grounds of Pashupatinath, the holiest Hindu temple on the Indian Subcontinent was both spell binding and educational. Hindus believe in both rebirth and reincarnation and it is a popular belief that to attain moksha one must die and be cremated in this temple which will release the body from the cycle of repeated rebirth and death

The Bodhnath Stupa is located at a distance of 8 kms from Kathmandu. Dating back to the fifth century, this stunning stupa is one of the largest structures in the world and it is built at the birth place of Lord Buddha, the founder of Buddhism. Thousands of multi-colored prayer flags line the delicate strings overhead and groups of pilgrims flock here to perform the ceremonial rituals and pray at the shrine. This is Nepal’s most famous Buddhist monument, a shimmering white marble watched over by the eyes of the Lord Buddha.

The buildings near by are all very old and medieval looking with tiny, wooden doors and windows. The stupa is in the middle of a neighborhood. So, you will also see many old people sitting on the surrounding benches, basking in the sun while the younger generations lounge at the base of the stupa.

Patan is famous for its fine arts and its extraordinary architecture. Patan means the city of Beauty and lies just across the river from Kathmandu. Easily accessible from the capital it is a handicraft Mecca. Patan is also the source of most of the metal work sold elsewhere in Nepal. The many bronze shops offer great value for money.

Also famous for its handicap school where physically challenged people and formerly untouchable people are taught to make and sell sweaters, carpets and handicrafts. Buying something from here is a good way to help people who are trying to help themselves.

Patan also has its own durbar, a miniature of the Kathmandu Durbar but much more authentic and traditional. The area is brimming with ancient temples that are very well preserved. The entire city feels like the more ancient portions of Kathmandu with intricately carved balconies, narrow brick streets, temples, shrines. The streets have an age old look to them. Suwarma Mahavihara or Golden Temple is an impressive small Buddhist monastery. Dating back to the 12th century the entrance is flanked by 2 huge stone lions. Pigeons crowd the square pecking at the grain offered, you can also watch the ancient art of Tibetan Buddhist paintings on silk-Tankha art.

The buildings are cleaner and in much better condition so exploring is easier.