Casablanca – the largest city in Morocco

Forever immortalized in the Hollywood classic of the same name, Casablanca the largest city in Morocco seems to hold a romantic allure for many folk who have seen and loved the classic movie which stars Humphrey Bogart and Ingrid Bergman. Moreover the movie which won an Oscar in 1943, was shot in Florida not in Casablanca.

It is the commercial and economic capital of Morocco and it is fortunate to be located in one of the most fertile regions in the country the Maroc Utile. Casablanca, with a population of four million people is a modern and liberal city with a pulsating nightlife culture.

Like other big cities of the world it has extreme wealth and poverty coexisting together in a city dominated by maddening traffic, art deco buildings, wide boulevards, bazaars and the beach front neighborhood of Ain Diab where trendily clad Moroccans bask in the sun.

Casablanca has much historical importance as well as it was the site of the Casablanca Conference in 1943 between Winston Churchill and Franklin. D. Roosevelt. The Conference was held to chalk out strategy during the Second World War.

Lately, however Casablanca has suffered the consequences of global terrorism and has seen suicide bomb attacks on its streets in 2003 and 2007. These attacks have killed many civilians and have resulted western countries issuing warnings to their citizens against traveling to Casablanca.

History and origin of the name Casablanca
The City of Casablanca was established by the Berbers as early as 7th century BC The Phoenicians, Romans and Merenids through the ages ruled Casablanca in turn. At this time it was known as the important trading port of Anfa. Subsequently the Portuguese captured and destroyed the city in 1468. They rebuilt it and renamed it Casa Branca which when translated means ‘white house’. An earthquake in 1755 caused the Portuguese to flee. Later a Moroccan Sultan Sidi Mohammed III rebuilt the city and rechristened it Dar El Beida which means ‘White House’ in Arabic. Spanish traders used to call the city ‘Casa Blanca’ in Spanish which has the same meaning as the Arabic name. During the 19th century the port of Casablanca grew in stature and importance until it was colonized by the French in 1907 and established as a protectorate in 1912. The French spent a lot of money making Casablanca the commercial capital of Morocco and building many of the magnificent art deco buildings which line the boulevards of the city.

Casablanca and the rest of Morocco gained independence from the French in 1957.The current head of state in Morocco is King Mohammed VI, an enlightened and liberal ruler who ascended to the throne in 1999.

Getting there
ByAir
The city is served by the Mohammed V International airport which is a hub for the national airline Royal Air Maroc. It is located 30 kms away from the city. Several international airlines fly into Casablanca from French and Spanish Airports and air links exist with North America, the Middle East and Africa. It is a modern airport with all amenities. The older airport called Casablanca Anfa closed in 2006. The airport is well connected by train, bus and road to the city center. Taxis are available outside the arrival hall. Shuttle buses operate from the airport to various destinations in Casablanca. A train service is available from the arrival hall to the city center and the port.

By Train
Casablanca has two major rail stations which are operated by the state owned rail ways ONCF. The station for long distance trains is called Casa-Voyageurs. Trains from here operate to Marrakech and other cities like Tangiers and Fez. The other station is called Casa Port and is used by the local trains which operate on the Casablanca –Kenitra route.

The Airport shuttle bus makes a stop at the Casa – Voyageurs so tourists can catch a train to the popular destinations of Marrakech and Fez which conform much more to a tourist’s romantic notion of Morocco rather than the modern, bustling city of Casablanca.

By Bus
There exists several private bus operators in addition to the state run CTM coaches which provide intercity bus services. Some of these coaches travel to other European cities as well. The Bus station located in downtown Casablanca is called Gare Routiere. 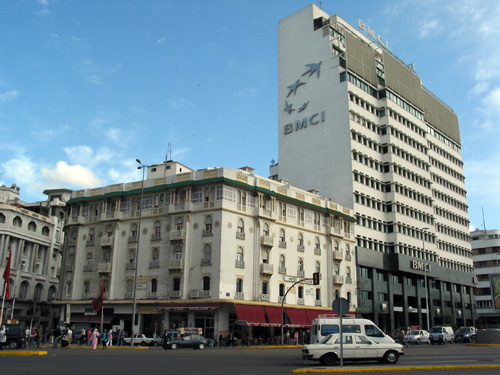 By Taxis
Two types of taxis ply on the roads of Casablanca the red ones are called Petits taxis which when translated from French means small taxis and are generally small cars like the Fiat Uno. These are metered taxis and operate all over the city. The second type of taxi is called Grands taxis and consists of older models of the Mercedes Benz car. These ply on pre defined routes and can also be used for inter city travel. These Grands taxis are usually a share a cab service and can be hired by the hour or the entire day. It is advisable to travel in a taxi in Casablanca while visiting nightspots in Casablanca as the city does have a high crime rate.

Climate
The best months to visit are between June to September when the day time temperatures hover in the high 20C(low 80F).The rainy season is usually between November to April. Casablanca on the Atlantic coast enjoys a temperate climate.

To See
Casablanca’s city center is dominated by grand boulevards and numerous well maintained art deco buildings which are usually white in color. Roads fan out from the center point of the city which is called the Place des Nations Unis. The Casablanca of Bogart and Bergman is best witnessed in the old city where small houses line the smaller streets.

Place Mohamed V, Central Casablanca
The Mohamed V Boulevard is where one can see the exponents of the Neo-Mauresque style developed by French architects in Casablanca in the 1920s and 1930s.
They were heavily influenced by the art deco style of architecture and this is well illustrated by buildings such as the post office, the police station and the palace of Justice. The French pumped a lot of money into the development of Casablanca when it was a part of their protectorate in 1912. The Ville Nouvelle is another section of the city where one can see further examples of this Neo- Mauresque architecture.