Bridgetown – The Capital and Commercial Centre of Barbados

Bridgetown, the capital and commercial centre of Barbados was originally called ‘Indian Bridge’. It is now a busy port located on the southwestern coast of the island along Carlisle Bay. The current location of the city was established by the British in 1628.

The city centre was originally a swamp, which was drained and filled-in to accommodate the city’s development very early in its history. Bridgetown is the only city in Barbados and hence attracts over half the island’s residents. The island of Barbados has one of the highest literacy rates in the Western Hemisphere of around 99.9 percent.

Barbados has a tropical climate and the weather is therefore generally sunny, warm and humid. Although Barbados falls in the hurricane belt, most of the major storms have fortunately bypassed the tiny island, but it is subject to the rare intense tropical rainstorm. The dry season in the region is from January to June.

Historical Overview
When the British first arrived here, the region of Barbados was virtually abandoned or uninhabited and one of the few traces of any prior inhabitation on the island was a primitive bridge constructed over the Careenage area’s swamp at the centre of the city now known as Bridgetown. This bridge was supposed to have been created by a people indigenous to the Caribbean known as the Arawak. The Settlers named the area Indian Bridge after finding the structure there. They believed that the Arawak tribes were driven away to the neighboring island of Saint Lucia, during an invasion by another indigenous tribe known as the Caribs. 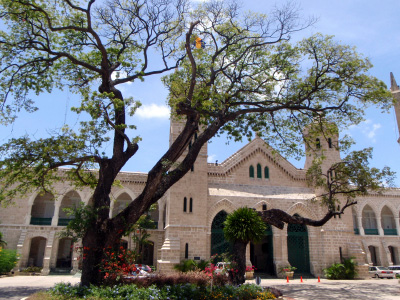 In 1654 when a new bridge was eventually constructed in place of the ancient one over the Careenage by the British, the area became known as The Town of Saint Michael and finally as Bridgetown.

Earlier, the Careenage was an important hub for trade and inter-island trading vessels. Now, it is mainly used by pleasure crafts such as catamarans, yachts, and fishing boats that not only entertain the locals but are also a great tourist attraction.

Many Jews from Brazil, persecuted by the Portuguese, settled in Barbados in the 1660s. Skilled in the sugar industry, they quickly introduced the sugarcane crop here. With their help, Barbados went on to become one of the world’s major sugar producers.

Bridgetown is the only city outside continental North America that George Washington visited, and the house where he stayed while he was here, the George Washington House, is now part of the Garrison Historic Area.

Things to See
Broad Street is the main street of Bridgetown and consists mainly of banks, department stores and duty free shops. The Parliament Buildings are located at the top of the street. The Barbados Parliament was established in 1639 and is the third oldest Parliament in the entire Commonwealth. The grounds of Parliament have two wings—the wing with the clock tower houses government offices while the east wing houses the Senate and House of Assembly. These buildings were built in 1871, replacing earlier structures destroyed in the fire of 1860. When you walk along Broad Street from the Parliament Buildings to the imposing Barbados Insurance Society Building, you can get an idea of the wealth that was once accumulated by the sugar barons of the island. The silver domed building with green towers is also called the Mutual Building and was built in 1895. A veranda encircles the building on the second-storey. The St Patrick’s Catholic Cathedral built in 1899 is another attraction here. Don’t forget to stop and stare at the well-proportioned pink Da Costa building, which was built in 1898. It mixes the elegant Georgian style of the upper story with colonial architecture featuring the wrought iron veranda.

Opposite the Parliament Buildings, there is the famous Trafalgar Square with a statue of Lord Nelson, which was erected in 1813, 36 years before Nelson’s column was put up in London in square of the same name and fame. It is a small park between the Inner Basin of the Constitution River and the Parliament buildings. The Square was officially renamed as the National Heroes Square in 1999, in honor of the national heroes of Barbados. Nelson had sailed to this island in 1805 only months before he was killed at Trafalgar off the coast of Spain, and the statue is a memorial to him. Another structure here is the obelisk-shaped cenotaph, a memorial for the Barbadians killed in the two World Wars. There is also a fountain to commemorate the first time the city got piped water. It features dolphins on clam shells.

The Bridgetown Port, also known as the Deep Water Harbor, is the island’s major port of entry for cruise and cargo ships, and acts as one of the major shipping hubs from international locations for the entire Eastern Caribbean. The Harbor is just across Carlisle Bay northwest of the Careenage Canal. The Bridgetown Port was recently dredged to allow safe access and berthing for newer and bigger cruise ships. The port also handles domestic trade especially the island’s main exports of agricultural products. The Careenage is a smaller canal in the centre of the city, and is also referred to as the Constitution River and lies about a half kilometer south of the large harbor. It is large enough for pleasure crafts and fishing boats.

If you want to find out in detail about the region’s rich heritage, there are many museums to keep you well informed. A visit to the Barbados Garrison, which features the Barbados Museum and Historical Society, is a must for all history buffs. The 18th-century base of the British Windward and Leeward Islands Command is an elegant Georgian building, dating from 1802. It was in the 19th century, a military detention barracks—the display galleries of the museum were once prison cells. It is currently the headquarters of the Garrison Committee who are still in the process of unearthing numerous old cannons scattered around the island. So far, about 400 have been found all over the place…from gardens and cellars, to beaches and beneath the fortifications.

The museum houses exhibits chronicling the natural history and arts and crafts of Barbados. Some of the most significant pieces of the collection here are mounted in front of the Main Guard House. The exhibits cover a wide range of the region’s history, from the time the coral island first appeared, the history of the indigenous people of Barbados to the independence of the island from the British and more recent history. It also tells visitors about the Amerindian and African culture, has many European decorative arts such as glass, ceramics, and silver as well as a fine collection of antique maps, prints and paintings.

Bathsheba is a quaint little fishing village on the east coast of the island, 23km from Bridgetown, and is a photographer’s delight for its picturesque rocky terrain and also boasts one of the island’s most spectacular beaches. It is known locally as the Soup Bowl because of its foaming surf and is a great place to go surfing because of which it was chosen as the ideal venue for surfing contests.

There is nothing like a tropical, exotic island like Barbados to kick of your shoes and take it easy. Enjoy the tranquility of the many beautifully landscaped tropical gardens that Bridgetown has to offer you. Just outside Bridgetown, in the parish of St Michael, is the Lazaretto Garden with its magnificent waterfall cascading over a rock face. A little further inland are the Ayshford Ratite Gardens, with their exotic birds, ostriches, pheasants and pigeons. In the heart of the countryside, surrounded by sugar plantations is a six-acre farm that has been transformed into a floral paradise called the Orchid World, where more than 20,000 orchids are grown and displayed. The Queen’s Park, once the grounds of the home of the commander of British Troops in Barbados around 1786 is a Georgian-style building that now serves as a theatre and art gallery. To the east of the building is a giant Baobab tree, about 18 m in circumference, which some say, came from Africa on a slave ship. It takes 15 adults with outstretched arms to encircle the trunk.

The Harrison’s Cave is a huge underground cavern with spectacular stalactites and stalagmites, streams of crystal clear water, breathtaking waterfalls and deep emerald pools. It is about 20 min by road from the city. Running north from Bridgetown, are numerous luxury beach resorts resting along the shore of the clear warm Caribbean waters and some of the most popular beaches Batts Rock and Paynes Bay.

The Nidhe Israel Synagogue is currently the only synagogue situated in Bridgetown built in 1654. It was destroyed by a hurricane in 1831, rebuilt, fell into disrepair and sold in 1929. In 1983, it was bought back by the Jewish community and was restored to its present state with its beautiful Gothic arches.

The Bussa Emancipation Statue is a public sculpture of a slave rebellion leader with broken chains. Bussa was a slave who helped inspire a revolt against slavery in Barbados in 1816. The statue was created 1985, 169 years after the rebellion.

For all cricket enthusiasts, this is the Mecca of cricket. The Kensington Oval is one of the major sporting facilities on the island and is primarily used for cricket, although it hosts other games too. The ground also has a jumbo TV screen and also a jacuzzi type area, for fans to watch while relaxing in the pool.